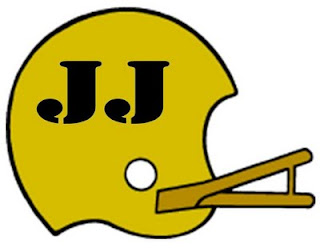 So I'm in 2 different fantasy football leagues this season, and I've just wrapped up my drafts. Both were live drafts, which I really enjoyed.

In the first league, which is a PPR format that's 12 teams deep, here's my starting roster:
My bench for this team is:

Honestly, I'm ambivalent about starting Lee Evans over Deion Branch or Zach Miller, and I'm willing to bet real money that Thomas Jones & John Beck are waiver wire casualties before the end of the week.

In the second league, which is a standard format (minus return yardage) that's 16 teams deep, here's my starting roster:
My bench for this second team is:
Yeah, some of these bench picks are reaches, but in such a large league, what choice have I got? I did end up with Hightower and Brown on both of my teams, which may be more of a reflection of my idiosyncratic strategy than an overarching faith in these particular players.

I really can't wait for real football to start...

All Hail The New Poet Laureate

In case you haven't heard, the United States of America has a new Poet Laureate, a man by the name of Philip Levine, who was born in 1928 and who, for decades, has been writing a kind of lean, plain-spoken verse that contains multitudes.

To be honest, Levine's poetry is something I've had to grow into. But this is not the fault of Levine or his amazing work. The fault is my own. See, it took me years to truly appreciate the kind of art that Levine creates -- an art that inhabits more than it displays. It doesn't show; it doesn't tell; it is a manifestation -- of detail & feeling & action.

A Philip Levine poem calls attention to itself in the way a person does by just standing next to you. To connect, you have to reach out, but, once you do, you are changed by the encounter.

Examples of Levine's poetry include "A Story" and "What Work Is" but you can find countless others online.

Better yet, check out one of his amazing collections, like the National Book Award-winning What Work Is. Just open it and start reading. It'll be an experience, I guarantee.

What I Wrote For Desert Companion Magazine

Below are links to articles I wrote for the August, 2011, issue of Desert Companion magazine. The theme of the issue is "Top Doctors" of the Las Vegas valley.