I've spent the last few days watching every episode of a show that I can only characterize as a guilty pleasure.

It's called Californication, and it's essentially an R-rated soap opera that tells the story of an irresponsible but handsome writer who has moved from New York to Los Angeles to oversee the movie adaptation of his magnum opus, only to have the circumstances of his life conspire to keep him in Southern California.

Maybe there's a certain amount of wish-fulfillment in my strange attraction to this show. I'm willing to admit that. Like all guilty pleasures, this show satisfies impulses that can't be defended aesthetically.

Each half-hour episode features sit-com-style setups and raunchy dialog, and, as far as I can tell, the show has some contractual obligation to have at least one shot of nudity in every iteration.

But, believe it or not, I don't watch the show for the nudity. Frankly, there are easier ways to get gratuitous viewings of flesh. No, I watch the show because I genuinely sympathize with the main character, played by David Duchovny. 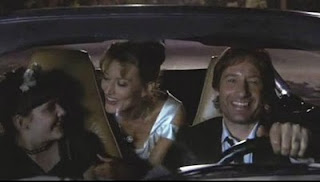 (A rare moment of family togetherness in Californication.)
Duchovny's Hank Moody, a successful novelist who seems to do precious little writing, is a kind of knight-errant, hobbled by his impulses and immaturity. He tries to do right by his daughter and her mother, but his hormones keep getting in the way. (He is impossibly successful as a sexual wayfarer.) He also holds some unexamined opinions about life and art that seem either willfully naive or nobly savage.

And the surrounding cast is stellar. From the luminous Natascha McElhone to the hilarious Evan Handler to the precociously compelling Madeleine Martin, Californication has managed to build a kind of ad-hoc family of characters whom I've come to care about, even as I recognize their obvious (sometimes rather stereotypical) failings as people.

Also, the show's comedic sense isn't mean-spirited. It's inclusive, meaning that even minor caricatures tend to get a chance to at least flash a glimpse of full-fledgedness. Someone who gets satirically skewered one second also gets a line or two of emotional and/or philosophical depth in the next. Case in point: Kathleen Turner's run as a super-libidinous, middle-aged agent who nevertheless gets to dispense some wisdom to Hank when he engages in fisticuffs at her house party and who also makes strange amends to Evan Handler's character after she deals a body-blow to his career.

Having said all of this, I still contend that the show has none of what the average person would call "redeeming value." It really doesn't. But it is, at least for me, entertaining.

And which of us doesn't have our guilty pleasures? I think it's part of what makes us who we are.

Another Example of Only In Las Vegas: The Penis On Pecos

So, on my meaderings through the city today, I passed by the infamous "Penis On Pecos," the custom-designed, mid-1970's house on Pecos Road whose overall shape is decidedly phallic...

(picture it as a phallus, pointing left.)
...only to find that it is now a foster care agency (with a website that's even worse than my own!). Does anyone else see this as cosmically appropriate?

While I couldn't hop into a helicopter to take a top-down shot of the house, the following shot of the "gonad" end of the building should help you build the correct mental image of the house. 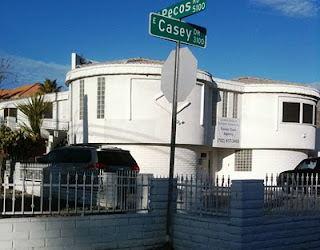 (this pair of rooms should round out your imagination nicely)
If not, you can also read the Las Vegas Weekly's original article about this unique local landmark.

It's further proof that Las Vegas ain't only about the casinos.

When I Don't Write

For the last several days, I've been sick. Not deathly sick, but sick nonetheless.

I've had a head-cold that makes my eyes feel like they've been pumped full of super-heated helium while my sinuses have started leaking a toxic sludge that burns my nostrils & flows like molten lava down the back of my throat every time I tilt my head back.

This makes relaxing a little rough, and it makes sleeping problematic, because when I wake up, the congestion & post-nasal drip have rendered my throat both clogged and raw. In other words, I've been waking up feeling worse than when I fell asleep, which ain't conducive to the whole healing & recovery process.

As a result, I haven't been writing.

Since I am neither famous nor rich because of my writing, the fact of my not writing is not of world-shattering importance.

Except that it is, to me. 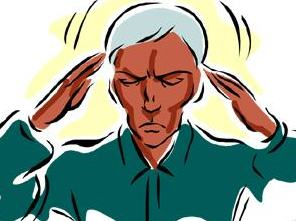 See, when I don't write, stuff starts to build up in my head, much like the congestion from my cold. This stuff ain't thoughts, exactly. It's little tidbits: half-formed ideas, images, lines of dialog, emotions tied to sounds and other sensations. It's also reactions & memories, dreams & other imaginings. It's the collected residue of my ever-narrating consciousness, and I truly wish I could just forget most of it.

It's not that I have perfect recall or anything like that. It's just that all this stuff keeps flying around inside my head, banging into itself and breaking into smaller pieces -- or forming into larger clumps that do even more damage as they whiz through my mind, smashing and/or absorbing everything in their path until they themselves are smashed or absorbed by something else.

Example: I have a short phone conversation with a friend, wherein a movie gets mentioned that has a scene in it with dialog that is, I suddenly realize, remarkably similar to the dialog I've been imagining between the main character of my new novel and his nemesis -- only the movie is far funnier than my imagined dialog, which is frustrating because my new novel is supposed to be a comedy. And now I've forgotten the question that my friend just asked me, so I have to ask him to repeat himself, which occasions a comment about my preoccupation causing me to be less attentive than usual. And, I'm sorry, but what movie were we just talking about, again?

With all that constant colliding and accreting going on, it's hard for anything that has a definite and deliberate shape to form, which means my thoughts remain a jumbled, chaotic mess until I can do some head-cleaning.

It's like trying to carve an ice-sculpture while a tornado circles around you, hurling debris at you & shattering anything you carve into a million pieces every few seconds. Until the weather clears, you're not going to get much work done.

So, for me, the writing process begins with me purging this stuff from my brain. Only then can I really begin to think clearly. Only then can my thoughts begin to take on the kind of form & function that approximates something intelligible and/or useful.

Thus, I always begin with my journal, and my journal is less a record of my life than it is a kind of sponge I use to scour out the inside of my skull, cleaning & polishing that inner surface so that it becomes a clear & open surface where I can build something with real heft and dimension.

Whether it's another chapter of my novel, some other piece of fiction, or an essay or review, what I'm writing always begins with a purging, this exorcism of all the bats in my belfry. And, since I haven't been writing for the past few days, my mind has been turning into a dangerous mess that has truly threatened my ability to think clearly.

Now that I've gotten all this out, I can finally begin to think.

Maybe I'll even get some writing done.