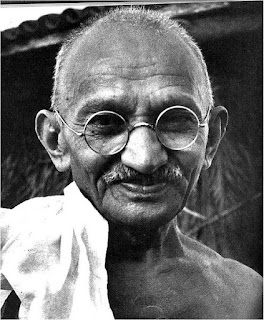 "One day Mahatma Gandhi was getting on a train in Calcutta, surrounded by many of his followers, when in all the hustle and bustle his shoe fell down into the small gap between the train and the platform just as the train was moving off. Without hesitation, Gandhi took off his other shoe and threw it after the first, as his followers looked at him, stupefied. Gandhi explained one shoe was no good to him, and no good to the person who would find it on the track. So why not throw the other show down on the track, so at least the finder could have two shoes?"

- from Little Theories Of Life by Peter Fitzsimmons.