My Dream With Ray 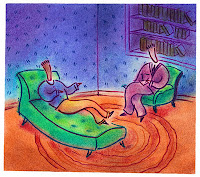 Had a dream last night that I was in a therapy session with my old friend Ray, with me on a couch while Ray sat in an armchair, writing on one of those giant sketchpads people use in art classes.

I was talking about my happy childhood when I realized that Ray wasn’t listening to me. He was staring out the window at an ice cream truck passing by on the street.

I lifted my head from the couch to look out the window. I could hear the pied-piper music of the ice cream truck as it slowly rolled down the block, but it didn’t seem to have anyone sitting in its driver’s seat. And it wasn’t stopping, even though it was being followed by a long, shuffling parade of zombie-like children, each holding out a dollar bill and waving it back and forth.

I asked Ray if he wanted some ice cream, but he shushed me with a motion of his hand, which I noticed wasn’t holding a pen or a pencil. Instead, it was holding a long, thin needle, as long as a knitting needle but thinner and with a very sharp point from which a single drop of blood hung but never fell, no matter how much Ray gestured with it.

The ice cream truck was already moving slowly, but it slowed down even more as Ray and I watched, allowing the parade of children to catch up to it and kind of swarm around it. But it didn’t stop, even as the children slapped their hands against its sides, and the pied-piper music shifted ominously into a minor key which also seemed to make the daylight get dimmer so that everything turned a little gray.

I asked Ray again if he wanted some ice cream, and he shook his head and, using the needle as a pointer, indicated that I should lie back down and resume talking about my happy childhood.

Ray suddenly stood. The sketchpad slid out of his lap onto the floor, and I saw that he’d been using the blood-tipped needle to draw row-after-row of happy faces on the pad that, because of his subtle use of shading, formed a giant sad face when I looked at the page while tilting my head.

Ray spoke without taking his eyes off of the ice-cream truck.

“You don’t understand,” he said. “That truck never stops. It never, ever stops.”

I got up and stood next to Ray as the ice-cream truck rounded a corner out of sight. We could hear the music shift back into a happier key, and the trailing crowd of children seemed to speed up their shuffling, as if whatever was driving that truck had suddenly hit the gas.

The light brightened as if a cloud had passed from in front of the sun, and I turned to Ray, who was still looking towards where the ice-cream truck had gone.

Ray shrugged and bent over to pick up his sketchpad. I saw him wipe tears from his eyes as he sat back in his chair. He looked up at me and said, “You were talking about your childhood.”

I nodded and lay back down on the couch. Ray waited until I began speaking before he resumed scratching at his pad with that needle, drawing smiley faces with his own blood.

(NOTE: I'm not sure whether this is the actual dream I had or the product of my imagination several hours after waking up. In any case, Ray is a real friend of mine who is a psychiatrist.)