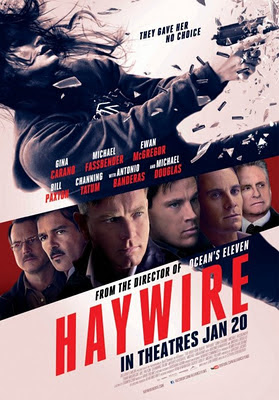 So, my wife took me to see Haywire a couple of days ago.

It was a matinee, and I wasn't expecting much, even though this movie is directed by Steven Soderbergh, whose stylish visuals can make even the most predictable storyline interesting (e.g., the Ocean's Eleven sequels).

Haywire wasn't bad, its plot reminiscent of Sam Peckinpah's The Killer Elite, with murderous operatives plying their tricks and double-crosses under the auspices of secret agencies in an underground market for illicit activities. Indeed, the most imaginatively sublime moment of Haywire comes as the character played by Michael Douglas negotiates with the character played by Ewan McGregor, referring to the movie's heroine as "value-added." It's the only moment where the movie opens up into a full-fledged universe rather than being just a sequence of set-pieces.

But, hey, we're talking about an action-movie here, not The Godfather. It's just that Haywire is one of those genre exercises that's so cool it's ice-cold. As I watched, I started looking forward one of those totally nihilistic endings from the 1970's, where the insignificance of everything is underscored. But don't worry. Soderbergh is commercially-sensitive enough to avoid that. Haywire is like a rollercoaster: it has some fun twists & turns, but its ends up in a place that's comforting and all-too-familiar.

One of Haywire's many bright spots: The movie's lead is played by Gina Carano, an MMA veteran who acquits herself nicely as an operative who finds herself betrayed and on the run. Soderbergh clearly loves her dark eyes and amazing jawline, composing shot-after-shot centered just on her face, perhaps to emphasize that Haywire is the story of a girl beating up a bunch of boys. I foresee more movies in Carano's future, especially ones that showcase her athleticism. (Need I dare speculate on a sequel?)

Another bright spot: the soundtrack by David Holmes. It was interesting without being intrusive, and it contributed greatly to the mood of the movie.

Something to quibble over: the fight scenes. Maybe I'm nitpicking, but I'm starting to hate fight sequences that are so obviously choreographed that they boil down to a kind of dance where one actor does something then the other actor does something and so on. Fights should be messy, brutal confrontations where both combatants are doing everything they can to survive and win. But that's just me, as they say.

In all, I give Haywire a B, maybe a B-minus. When Gina Carano's character puts her hair into cornrows and covers her face in war-paint, I just had to laugh.