Richard Feynman, for those of you who don't know, was a physics badass. He helped on the Manhattan Project, won a Nobel Prize, created something called "Feynman Diagrams," and served on the presidential commission that investigated the Challenger Disaster. This is a guy, who, even before he earned his Ph.D at Princeton, gave a seminar that was attended by Albert Einstein & John Von Neumann!

He was also an avid amateur percussionist and, while at Caltech, liked to work on physics equations while sitting in a nearby topless bar. He even testified on behalf of the bar when county officials tried to close the place.

In other words, Richard Feynman was a really interesting guy.

Now, the story of Feynman's life has been distilled into graphic-novel form, simply entitled Feynman, by writer Jim Ottaviani & artist Leland Myrick (assisted by colorist Hilary Sycamore), and it's a fascinating, enjoyable read. 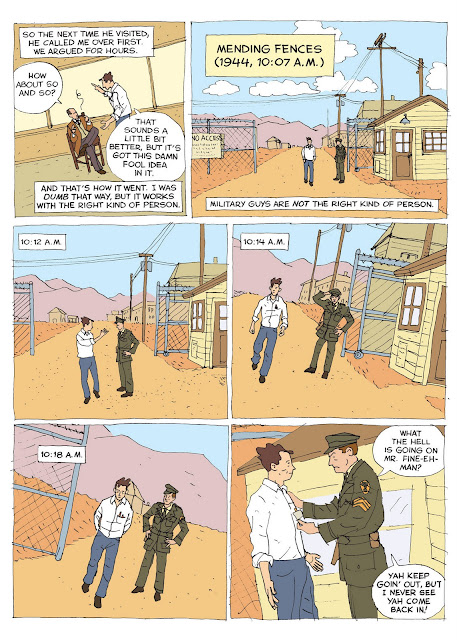 Like most actual geniuses, Feynman didn't think or act like the rest of us, and it's illuminating to a half-wit like me to see such a mind in action. Indeed, it's inspirational.

See, Feynman didn't just apply his big brain to physics. He also applied it to his everyday life, and this book excels at portraying the famous scientist's mischievous spirit, quirky sense of humor, and essential decency. His devotion to his first wife, Arline, is especially touching, as is his unexpectedly emotional reaction to the first successful atomic bomb test at Los Alamos.

Lives such as Richard Feynman's give me hope. As surrounded as I am by the utterly mundane, petty & trivial interactions that make up a normal life, it's good to know that there are better minds out there, tackling larger issues and making their mark.

So reading  Feynman serves as a kind of antidote to the news of the day. It reminds me that history isn't just made by jerks.