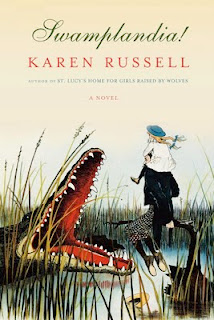 Karen Russell is a bonafide literary darling. Her first book, St. Lucy's Home for Girls Raised by Wolves, got her noticed for her highly imaginative storytelling and her beautiful way with words. Since then, critics have embraced her as one of the most promising literary talents in America by putting her on list after list of the top young wordsmiths in the country. 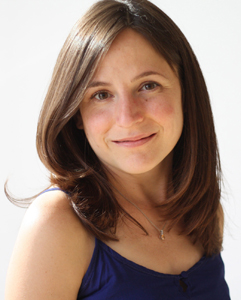 (Karen Russell, literary darling)
Now comes Swamplandia!, her first novel, a book that has been met with high expectations and, by and large, meets or exceeds them.

Swamplandia! tells the story the Bigtree family, who live on a small island in south Florida, running an alligator-wrestling show for tourists. The book opens with the family's signature act, in which the matriarch, Hilola, dives from an elevated platform into a dark pool filled with gators (or "Seths," as the family calls them). She then deftly and bravely swims across the pool and safely exits, to the delightedly terrified gasps of the gathered crowd.

Or, at least, that's what's supposed to happen. Of course, catastrophe soon strikes the Bigtree clan, along various fronts. Their bread-and-butter act goes asunder, their small nucleus loses a core component, and corporate competition crops up in the form of a rival theme park, so the Bigtrees are forced to cope with the aftermath, often in ways that change their little family irrevocably, as the father, "Chief" Bigtree, soon takes off for the mainland on a mysterious quest, leaving his children behind to fend for themselves.

My little summation above makes it sound as if Swamplandia! is an unrelenting veil of tears. Nothing could be further from the truth. The book is actually filled with moments of real beauty and humor, though the laughs are often deeply sarcastic and the beauty always comes tinged with physical threat.

Most of Swamplandia! is narrated by Ava, the youngest Bigtree, who has spent her life training to be her mother's successor. She is brave & smart but confused in the way all of us were when we were on the edge of adolescence. Other chapters concern the struggles of her older brother, Kiwi, a bookish & idealistic teenager with deep resentments. Both embark on quixotic & occasionally dangerous adventures, seeking to restore Swamplandia! to its putative glory days. The middle sister, Ossie, embarks on a wholly different quest, though hers is even less conventional. Indeed, it's other-worldly.

Every group, especially a family, relies on a kind of world-view to maintain cohesion. These world-views incorporate history, as well as clearly-defined roles for each member, so that everyone knows their place, at least emotionally. (For the Bigtrees, this involves acting like they're an indigenous indian tribe, though they're actually transplanted midwesterners.) Often, these world-views take on the sheen of myth and folklore, incorporating as much fiction as fact. Things get dramatic when the myth of a given family disagrees too much with the facts, or when members of a family start to resist their given roles. Russell takes this theme of how the myths & lore of a family can affect its members, and she fashions a wondrous & pungent tale of how a generation of Bigtrees comes of age.

This is ancient stuff, gloriously recast. A son seeks to usurp his father. A daughter seeks to replace her mother. And another daughter seeks the love of her life by traveling through a dark and dangerous land. This raises the question: what mythic plotlines does your own family history contain? And can you recount them in ways that are both entertaining and cathartic? Karen Russell can and does.

Of course, there is no such thing as a perfect work of art, and even a low-watt hack like me can find things to nitpick in Swamplandia!, including Russell's insistently metaphorical turns of phrase, some of which are brilliant, while others get a little precious. But her style is in keeping with her theme, which includes the ways in which a family's history gets redefined and remade with each generation. It's a theme Faulkner would appreciate: he knew not only that the past defines us, but also that it never really leaves us.

And, sure, some of the plot of Swamplandia! can come off as overly-contrived, but what adventure doesn't have its share of unlikely coincidences and near-escapes? What family history isn't chock-full of nearly-didn't-happens? As implausible as some of the book can seem, Russell's rock-solid characterization of Ava anchors every flight of fancy. Hers is the insistently vibrant voice that recounts how young Ava lives and breathes and copes. Hers is also the measured and wise voice, talking to us from some future remove, recounting the picaresques of Kiwi as he negotiates his burgeoning manhood.

And it isn't all g-rated scrapes with alligators, though our protagonists do prevail. While Ava's encounters with the characters of the Bird Man & Mama Weeds are nothing short of traumatic, she joins a pantheon of precocious, plucky heroines who, through effort & persistence & devotion, transcend their trials. Meanwhile, Kiwi enters the World of Darkness, the land of Swamplandia!

's rivals, where he inadvertently stumbles from one triumph to another, getting himself quite beaten up in the process. As for Ossie, her ghost-hunting leads her to the very precipice of annihilation. Perhaps it's best that her story is the most spectral, in that she gets no chapters of her own.

In the end, I give nothing away by revealing that the surviving Bigtrees move on from Swamplandia!, each of them possessed of a slice of hard-won wisdom gained from measuring their personal mythologies against the cold, hard facts of their circumstances. (And isn't that what we all do as we grow up?) Their trials have scarred them, but they remain a resolute & loyal family, which, to me, counts as a happy ending.