My Crazy Neighbor's Quest For Peaches

So, a few days ago, one of our neighbors came up to our house and said that her cockatoo, "Peaches," had escaped. This neighbor was an older woman, slightly built, wearing a jogging suit, and she had long, gray hair bunched under a baseball cap & a deeply serious look in her eye.

She didn't seem crazy, at least at first.

So Brother Juan let her into our backyard so that she could scout out the surrounding trees for Peaches. This was unsuccessful, however, and the neighbor soon went on her way.

That evening, though, we could hear her, yelling from her back porch, "Peaches! Peeeaches!"

She did this every 10 seconds or so, for hours, well past sunset.

And she's done it now for 4 days straight.

This is annoying enough, but, the day before yesterday, I came out of the garage to find her car blocking my next-door neighbor's driveway, with its driver-side door hanging open as this woman was jogging away down the middle of my street, once again yelling, "Peaches! Peeeaches!"

Meanwhile, my next-door neighbor was trying to back out of her driveway in order to go to work.

Peaches' owner had to be corralled back to her abandoned car so my next-door neighbor could be on her way, while a man who appeared to be her son apologized to all of us before they both drove off. The man's mother seemed perturbed that we didn't appreciate the seriousness of the situation, having forced her to give up her middle-of-the-street foot-chase to come back for her car. 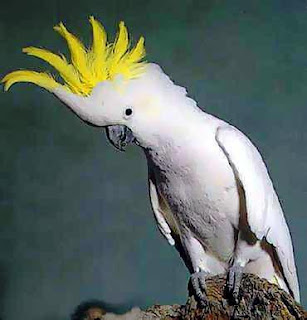 (This is the kind of Peaches I'm talking about...)
Now, today, Brother Juan tells me that this morning, while he was showering, he noticed something peculiar. See, his bathroom window looks out over our backyard, and while we've all kind of gotten used to the constant call of "Peaches, Peeeaches!", none of us has taken this as a sign of how deeply committed this woman is to finding her errant pet.

What Brother Juan saw: my crazy neighbor lady, shimmying sideways along the top of the cinderblock wall that borders our backyard, all the while yelling, "Peaches! Peeeaches!"

Fearing for her safety, Brother Juan quickly dressed and ran outside. Grabbing a stepstool, he helped our neighbor down off the wall while she muttered about how worried she was about her bird. Brother Juan then led her back out onto our street and wished her luck.

Here's the thing: her yard doesn't share a wall with ours, which means she'd been shimmying along over a block's worth of wall or she climbed up there from the sidewalk. And I've already mentioned her age and size, right?

I've gotta give her points for perserverance, though. She must really love that bird.