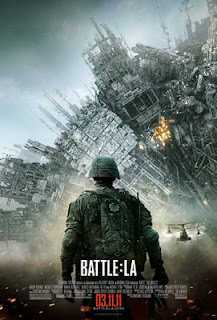 I just saw the movie Battle:Los Angeles, and all I really have to say about it is it's like a roller-coaster ride. It's mindless, sensational fun that you're not supposed to think about.

In fact, as in riding a roller-coaster, thinking about Battle: Los Angeles ruins the experience. You're just supposed to surrender to your sensations, or you drain away all the fun.

And the fun in this movie boils down to watching a group of Marines fight off waves of invading aliens in firefight after firefight filled with flying tracers, explosions, and extremely loud sound-effects.

But Battle: Los Angeles lasts longer than any roller-coaster ride, and therein lies its major weakness. As a movie, it's the standard 2-hour length, even though its premise and plot are rickety constructions that would never pass inspection by whatever government entity is in charge of roller-coaster safety. 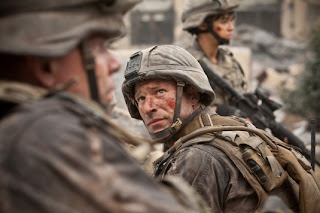 (Aaron Eckhart wonders why he enlisted for this particular tour of duty.)
It isn't the implausability of the story that bothered me. After all, I am a great lover of implausible movies. But Battle: Los Angeles  also has a tone of jingoistic earnestness that is antithetical to any campy embrace of fantasy, no matter how realistic the special-effects are. Look at a great alien-invasion movie like, say, The Adventures of Buckaroo Banzai, or even Independence Day, and you'll see what I mean.

Plus, its by-the-numbers plot goes stale even before the credits stop rolling. Case in point: I knew which members of the cast were doomed within seconds of them appearing on-screen, just by how their characters interacted with each other. (SPOILER ALERT!) And you're going to tell me that an invading army of interstellar aliens can be shut down just by blowing up their hotspot?!

Perhaps it's the tight focus on a squad of plucky Marines that gives this movies its Saving Private Ryan-meets-Armageddon bombast, but I can't help feeling there are better ways to dramatically highlight the heroism of American jarheads -- like watching the amazing documentary Restrepo, which, shot-for-shot, is more exciting and affecting than any single second of Battle: Los Angeles.

Yeah, so my capsule-review of Battle: Los Angeles comes down to this: Go watch Restrepo.