Vengeance directed by Johnnie To 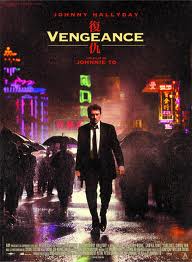 As an exercise in genre, Johnnie To's Vengeance is a masterpiece, a kind of B-movie pastiche that somehow transcends the sum of its parts.

There's a hero with a dark & troubled past who finds himself surrounded by criminals who live by a kind of unspoken code; there are scenes of well-choreographed violence filled with an endless shower of bullets; there's a hysterically weird uber-villain with kinky mannerisms; there are multitudes of colorful minor characters; there's stilted dialog and contrapuntal interludes of domesticity that serve to accentuate the shadowy milieu in which our story is set.

Plus, Vengeance boasts the well-practiced eye of Johnnie To, who carefully composes every shot so that the movie is a kind of second-by-second visual feast. Nowadays, it seems fashionable to film violence as visual vomit with half-second splashes of action that seem disjointed and chaotic. Not so with Johnnie To, who treats every second of his movie as a continuation of the plot, somehow relaying a keen sense of spatial relations even as the camera zooms and dives.

(Picnic's over. Let the man-dance begin!)
Now, whether all of this coalesces into art is a debatable point. But I'm confident in assessing that Vengeance constitutes a master-class in craft.

Of course, for those of you who like your crime-dramas to have an air of gritty realism, Vengeance may strike you as a kind of comic-book-come-to-life, with all the veritas of a Michael Bay movie. I concede the point and am willing to pigeon-hole Vengeance as a crime fantasy, with a story as fabulistic as anything by Tolkein.

And the acting? Well, let's just say the best way to appreciate it is to think of it as a lampoon on the supposed stoicism of hard men. For good or ill, the dialog in Vengeance has been pared down to essentials, and I always appreciate artistic economy.

Starring the venerable French icon Johnny Hallyday as the memory-addled (think Memento) protagonist who nonetheless knows what to do when the bullets start flying, Vengeance also stars a host of Johnnie To regulars, including a trio of local hit-men who decide, at considerable cost, to help our hero in his quest to avenge the harm done to his daughter. These three are by far the most interesting people in the film, and they carry what little thematic weight that Vengeance has with workmanlike aplomb.

(Our hero meets his helpers.)
I have avoided revealing much of the plot of Vengeance because, like all thrillers, so much of its story relies on timely revelation. In other words, it matters to this movie when you find out what you know, and I am trying to preserve as much of that experience of the movie as possible while still discussing it.

Suffice it to say that I recommend this movie to anyone who appreciates the entertainment value of fictional violence.