Fool Me Once by Rick Lax 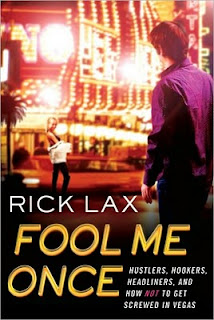 Rick Lax went to law school and wrote a book about it called Lawyer Boy. He even graduated and passed the bar exam. But, instead of becoming an attorney, he lit out for Las Vegas, and, as far as I can tell, he's been here ever since. Indeed, he's become such a naturalized Las Vegan that he now blogs about his wanderings through the city in the Las Vegas Weekly.

Lax's second book, Fool Me Once, tells the story of what drove him to travel to Sin City after taking the bar exam, and, in a word, it's deception. Without giving too much away, I'll just say that the author has some compelling personal reasons for wanting to understand how deception works and why people use it. These reasons stem from deep in Lax's childhood, when he developed a fascination for magic tricks, and they also stem from more contemporary circumstances involving Lax's love life.

What follows is an engaging & provocative account of one man's first few weeks in the den of iniquity that is Las Vegas, wherein Mr. Lax falls in with various interesting, if not reliable, characters, all of whom have much to teach the author about the nature of deception.

Las Vegas seems an obvious choice for such an education. It's a city built on all sorts of fantasies, where shiny facades hide prosaic (even dangerous) realities, and Fool Me Once serves as a colorful snapshot of the Strip in the late 2000's, with its burgeoning nightclub scene and hordes of beautiful (and not-so-beautiful) people seeking a good time amidst the glittering casinos and games of chance. This is a city where knowing the odds is important, and Lax is obsessive about properly gauging probabilities, whether he's playing poker or trying to decide if the person sitting next to him is telling the truth. For the most part, this obsession serves the author well.

Lax visits a club of magicians, meets more than a few lovely women, has some great conversations with Pick-Up Artists (or "PUA's"), meets Lance Burton and Criss Angel, conducts some experiments involving the uses and misuses of trickery, and, finally, he comes to a belated realization of how a preoccupation with deception can come back to haunt you. Along the way, he manages to impart some insights to the reader. Here's one of the more crass ones: "Strippers pride themselves on not sleeping with guys for money; call girls pride themselves on not getting naked before large groups of men."

It took me some time to get through Fool Me Once, through no fault of Mr. Lax. He has a fluid style, and he is an entertaining storyteller. And I truly enjoyed the book. But his preoccupation with deception hit a little close to home, so I pored over each page, soaking up its incidents and insights like it was a holy book.

Why did Fool Me Once affect me this way? Well, let's just say that I also have a deep & troubled relationship with deception -- a relationship that I have only recently ironed out. To get me to reveal more, you'd have to buy me a drink.

A more rewarding use of your time and money would be to buy Fool Me Once and read it. Honestly, would I lie to you?