Talk about taking a simple idea and running with it.

Khan Academy is the brainchild of Salman Khan, a young man working as a hedge-fund analyst in California's Silicon Valley. His original idea was to create short, illustrated, step-by-step web-videos as tutoring lessons for his cousin, who was struggling in math. 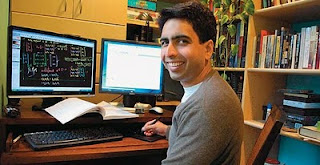 (Salman Khan: A good man with a great idea.)
These videos feature Khan's voice over an animated screen showing examples of whatever his subject is, be it quadratic equations or the laws of physics. None of the videos is more than 12 minutes long, which makes them perfect, bite-sized chunks of educational nutrition.

Then Khan got an even better idea: he put those videos up on YouTube so that anyone could view them, for free. Khan himself has been quoted with this gem as his motivation:


"With so little effort on my own part, I can empower an unlimited amount of people for all time. I can't imagine a better use of my time."

Talk about walking the talk.

The videos went viral, and the demand for more skyrocketed. Within a few years, Khan had quit his hedge-fund job and was working as a full-time volunteer educator, creating a whole series of web-videos on a variety of subjects, including science, history, and economics.

Salman Khan then founded Khan Academy, a non-profit organization that manages a web-site that promotes the use of these videos around the world FOR FREE. His work has gotten the attention of both Google and the Gates Foundation, both of which have awarded the Khan Academy with funds to expand their reach and scope. (Indeed, Bill Gates is purported to use these lessons to help teach his own children!) PBS & CNN have done profiles on Salman Khan, and Forbes magazine has called him "a name you need to know" in 2011.

So, thanks to Salman Khan and Khan Academy, if you've got a computer and an internet connection, then you have access to basic curriculum on important subjects like math and science and history and economics. And it's free. Whether you need a little tutelage personally, or you're trying to help your kids get a leg up on their proficiences, or you're operating a school that's sadly short on resources, Khan Academy has what you need. The site even provides tracking & analytics for your students, should you need them.

As of this writing, the Khan Academy website boasts over 41 million downloaded lessons of over 2,100 videos in such subjects as Algebra, Chemistry, Physics, Banking, and History. And they're giving it away, for the betterment of the entire world.

I can think of no downside to Khan Academy. If education is an absolute good, then Khan Academy is doing sacred work.

Find them, use them, support them, and promote them.

The world needs more of this.