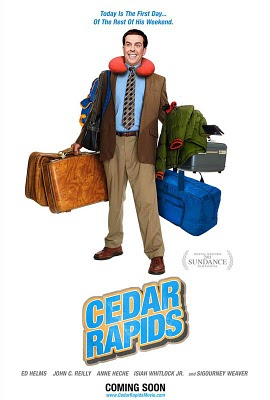 Cedar Rapids is a modest film about an innocent who travels from his backwater hometown to the big city for the first time. Ed Helms plays this innocent with the same open-faced earnestness that he brings to the role of Andy in The Office. And, just like the blockbuster The Hangover, Cedar Rapids sports an all-star cast of comedic talent.

But, unlike either The Hangover or The Office, Cedar Rapids doesn't have satire or condescension at its core. Sure, it has its share of chuckles and outlandish situations, but it seems to have been made with an overarching, warm affection for its characters. Its shots at the blandness of midwestern culture aren't nearly as pointed as Fargo, and it even manages to make the argument that insurance salesman can be noble (which is no small task in my eyes!).

Perhaps this impression stems from the lead character himself, a genuinely pure-hearted soul who, despite his ignorance of the ways of the world, ends up being more capable and resilient than even he himself thought possible. It's particularly telling that, under the influences of some illicit substances and the urgings of a friendly prostitute, the lead character becomes more of a gentleman, even as he is rendered hilariously incapacitated to act. 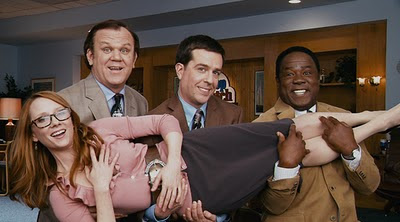 (The insurance salesmen at the heart of Cedar Rapids.)
Offsetting Helms's somewhat anodyne portrayal is the scene-stealing bombast of John C. Reilly, playing a kind of cynical buffoon who takes our hero under his wing (and who also proves to be more than he initially seems). Reilly, along with Helms, is proof of the argument that comic actors are generally more talented than serious ones. It takes genuine craft to be able to utter lines that express both depravity and insight, and Reilly seems to do it every time he opens his mouth in this movie.

The rest of the cast, including Sigourney Weaver and Kurtwood Smith, is similarly excellent, with surprise performances coming from Anne Heche and Alia Shawkat. Isiah Whitlock, Jr., seemingly relegated to being the token ethnic representative in the cast, somehow manages to relay a bit of nuance in his unmodulated baritone, throwing a kind of metafictional shout-out to my all-time favorite TV series, The Wire. Personally, I was also pleased to see Mike Birbiglia in a minor role, since I'm such a fan of his storytelling and stand-up.

Cedar Rapids is a good movie, if not a great one. Still, I urge you to see it.