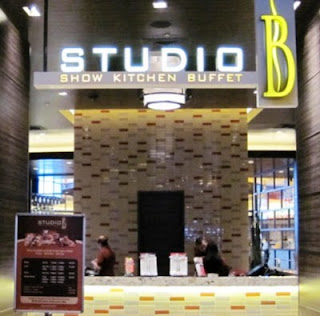 (In the mood for a B-grade meal? Then this is the place!)
As a longtime Las Vegas resident, I've eaten at more than a few casino buffets. And I've run the gamut when it comes to quality, from premier properties like the Bellagio to bottom-of-the-barrel joints like the Circus Circus. I've even paid the obscene prices that some buffets charge for their "premium" events, like Sunday brunch (where a gospel choir and pitchers of mimosas turned the meal into a kind of party) or Seafood Night (where piles of crab legs and bowls of chilled shrimp enticed diners to pay quadruple the normal rate).

When I was a starving college student, casino buffets were a godsend. I could pay the off-hour (i.e., breakfast or lunch) rates at, say, the Sahara (before they closed it) and stuff myself so full of slices of prime-rib and chicken (or sausage & eggs) that I could nibble on snacks for a day or two before the hunger pangs recurred.

So, given my long & comprehensive experience with the casino buffet, let me surprise you by finally admitting that I hate them. I really do.

Unfortunately, I have friends and family members who don't, and, so, on occasion, I find myself accompanying a group of people I care about to some buffet where I'm told I'll get a "great deal on some good food" -- and I am inevitably disappointed. This just happened a week or so ago, when I had a family member visiting, and my mother insisted that we have lunch at the Studio B buffet at the M Resort.

The result: I had to stand in line for almost 90 minutes before being seated, the food was barely tolerable, my drink came late and sat empty for most of my meal, and I had more than one run-in with some truly odious people (not my relatives, mind you). What's worse, right at the start, I picked up a supposedly clean plate (still warm from its run through the dishwasher) that had gum stuck to the bottom of it. It took me a whole minute to extract the gooey strands from my fingers, and then I had to spend some time chasing down someone to hand the soiled plates to. My appetite barely survived.

Without further adieu, here are my particular reasons for hating the buffet:

1. The quality of the food is mediocre at best: Even the best buffets serve food in ways that quickly degrade the quality of any dish, so that by the time you get it (whatever it is), your food is only about 50% as good as it could have been. Just about the only way around this is to attend a buffet that has stations with live cooks preparing certain dishes to order (like omelets or steaks). But such stations mean 2 things: you've just added to your wait-time for food, and you have to tip the cook in question, over-and-above what you paid to get into the buffet in the first place (unless you're a total cheapskate). And even the best cook can't overcome the less-than-prime quality of the ingredients he or she is working with. Case in point: I can take the same $15 that the Studio B buffet charges for lunch and spend it at any number of restaurants to get a high-quality, filling lunch that will leave some change in your pocket.

2. The lines are way too long: Because the vast majority of people are attracted to such lowest-common-denominators like price & portion size, casino buffets always sport long lines. In fact, this fact of life is so pervasive that I am automatically suspicious of buffets that don't have long lines. But I'm a firm believer that waiting in long lines actually shortens one's lifespan. Case in point: My recent lunch at the Studio B buffet at the M Resort lasted almost 3 hours, half of which was spent just standing in a long queue. Had we chosen to eat at a real restaurant, we could have had our meal and watched a movie in the same span of time.

3. People act like pigs: I hate to sound totally misanthropic, but I honestly believe that the lowest-common-denominator aspect of buffets attracts people with the worst manners -- people who think that the only possible measure of the quality of a meal is how much your plate weighs. These are not people I generally like to spend my meals with. Case(s) in point: During my recent visit to the M Resort, my mother, who is in a walker, got cut off by another middle-aged woman who apparently thought she was too good to wait in line. This same specimen of humanity later cut me off at the bread station just so she could get the last slice of pumpernickel, and then she yelled at a passing busboy to go get more. And she wasn't exceptional. The rest of the surrounding crowd bumped and jostled and piled their plates with grub to the point of structural unsoundness. Also, there's nothing like sitting next to people who stack their discards near you, giving you a close-up shot of their scraps while listening to them slurp down their next plateful.

4. Service is laughable: I realize that we're in the midst of recovering from an economic downturn that has every company focused on cost-cutting as a means of survival, but having a single server working a couple of dozen buffet tables is no way to service your patrons, even if all the server is doing is getting drinks and taking away discarded plates. Case in point: During my lunch at Studio B at the M Resort, I watched my server hustle at an inhuman pace trying to keep up with his continent-sized station. He did manage to eventually get us our drinks, but I actually had to hunt him down for refills, not because he was lazy or inattentive -- he was swamped. Call me a prude, but it's a bit unappetizing when the guy bringing your drinks has sweat pouring down his face.

So there you have it. Although I generally think highly of the M Resort itself, their buffet is just another in a long line of lowbrow feeding troughs.

I know others will disagree with me, which reminds me of another pattern that I've become familiar with: In Las Vegas, everyone loves the newest buffet in town. Maybe it's the result of a property coming out of the gate like gangbusters before such concerns as operating costs and portion control start to drag the new buffet back towards its mediocre equilibrium. Or maybe it's just that new things shine brighter. Either way, I've seen it happen with the Golden Nugget, the Mirage, the Rio, the Bellagio, and the M Resort. Of course, the latest scuttlebutt is about the Wicked Spoon buffet at The Cosmopolitan. I hear it's truly amazing.

And I'll make this bet with any of you: the next time I go to any casino buffet, the four reasons I've just listed above will hold true during that meal as well. I'd stake the price of dinner on it.