Rules of Engagement in Los Angeles

So, last Monday, I got in the truck with Grouchy John to visit a friend in sunny Los Angeles, leaving the Princess and Buddy Bear behind to hold down the fort.

We left early in the morning, and, since traffic was light and unimpeded by highway construction during our trek southward on I-15, we arrived a mere 4 hours later. 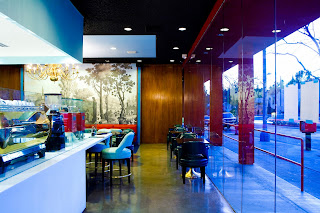 LAMILL Coffee in Silverlake.
(This pic was cribbed off their website.)
Grouchy John immediately set about scouting for coffee establishments. We hit up LAMILL Coffee Boutique in Silverlake, which impressed us with its artsy vibe, extensive menu, and high-quality espresso & tea. We also checked out Silverlake Coffee, which was less impressive but hardly a waste of our time.

Then we headed to Jones Coffee Roasters in Pasadena, whose bare industrial environs and well-pulled espresso made Grouchy John envious & appreciative. We spent a nice couple of hours there, just chillin' out and people-watching.

This is where Cousin Erica and DJ Chris Cox found us, and we all headed over to a little Mexican place for a quick bite. The fare was passable, except for Grouchy John's chile verde, which was excellent. 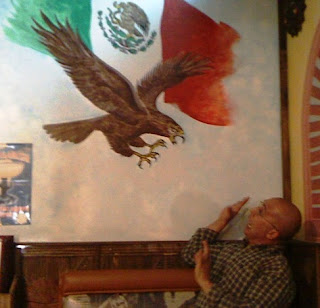 (Me, getting attacked by the decor at some anonymous Mexican place in Pasadena.)
Grouchy John & I then parted ways. He went off with Cousin Erica to attend a 3-day seminar in all things coffee (from Klatch) while I went with DJ Chris Cox to crash at his place and help him pack up for an impending move.

Oh, what fun it is helping someone move! But, hey, it's all good when I'm helping out a old friend. Besides, I have large karmic debts to settle, as anyone who knows me can attest.

The real highlight of the trip came on the next night, when I was taken to the Sony Entertainment Studios to attend a taping of an episode of the sit-com Rules Of Engagement, which stars Patrick Warburton & David Spade. 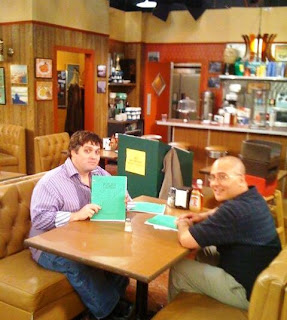 (DJ Chris Cox & I on the set of Rules of Engagement)
Since DJ Chris Cox is friends with producers of the show, we got VIP passes that allowed us to bypass the lines and sit right in the front row of the studio audience. We also got to take a personally-guided tour of the sets and offices. What's more, we even got to pig out in their craft services room!

The taping, which lasted about 4-and-a-half hours, was an incredible experience.

First, it was interesting to watch the logistics of taping a 22-minute episode of a television situation-comedy in a single night. The episode was shot in order, from beginning to end, and the cast and crew moved across the soundstage as the scenes of the episode moved from diner to office to apartment and back, and the amount of equipment that needed to follow them was astounding.

And, second, it was fascinating to see how the simplest adjustments made profound differences in the overall success of a particular scene. A small change in blocking, a tweak of the dialog or in the enunciation of an actor were all it took to punch up a situation so that the studio audience's laughter was both genuine and enthusiastic.

Third, it was refreshing to watch a high-stakes, high-speed enterprise work productively and yet maintain an air of collegiality & playfulness. It was clear that these people were on a very strict clock and that they had to maintain a finely-honed level of attention to detail while they performed & recorded their work. But it was also clear that everyone enjoyed the process, displaying the kind of esprit-de-corps that bespeaks great management.

Finally, the comedian who was in charge of warming up the studio audience and keeping them engaged, was, in my opinion, one of the finest live performers I've ever seen. Crowdwork is, in itself, inherently difficult, but Ron Pearson was more than equal to the task. He worked the entire crowd, prodding responses from reluctant audience members with provocative patter that kept everyone chuckling. I even got some attention as he seemed to enjoy playing a bongo tattoo on my bald head every time he passed by.

And then he started juggling. 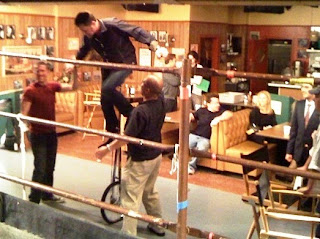 (I get recruited to help Ron Pearson try to kill himself in public,
as cast member Adhir Kalyan [in the suit] looks on.)
Turns out that Ron Pearson is a master juggler, using a trio of clubs in a variety of stunts, including the one pictured above, where he recruited me and 2 other audience members to help him juggle while balancing atop a tall unicycle amidst the tight confines of the little strip of concrete between the studio audience and the soundstage. 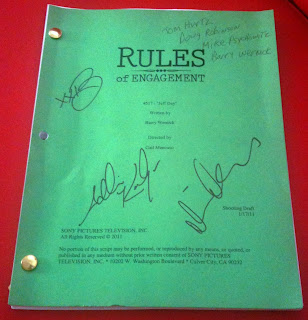 After the taping wrapped, the cast graciously mingled with the studio audience for autographs and chitchat. DJ Chris Cox's producer friends also got us autographed copies of the night's shooting script. Mine is pictured above. I am a such a sucker for souvenirs.

After leaving the Sony Entertainment Studios lot, we hooked up with an old fraternity brother for a late-night meal and some colorful reminiscences. There's nothing like spending an hour catching up with someone who has known you for over 20 years and is not bashful about pulling skeletons out of your closet in order to mercilessly tease you with them.

Color me snobby, but I never imagined that attending the taping of a TV sitcom would be so enjoyable and interesting. Makes me hopeful for the rest of my visit.