You Will Meet A Tall Dark Stranger by Woody Allen 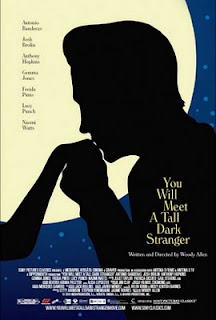 (You Will Meet A Tall Dark Stranger is directed by Woody Allen)
I have always been a fan of Woody Allen. I love the way he creates characters who are both vibrantly human and exotically alien, all at the same time. They seem to be from a parallel earth, where everyone frets and talks too much and moves through a rarefied world where the jazz clarinet, rather than the rock-and-roll electric guitar, is the solo instrument of popular choice.

In other words, Woody Allen's movies are a nice place to visit. I just can't imagine anyone actually living there.

His movies can also be great works of art. At his best, such as in Annie Hall, Hannah & Her Sisters, or Crimes & Misdemeanors, Allen engages and expands our sympathies as he puts his characters through their paces. At his worst (as in Celebrity or Scoop), he concocts confections that go down sweetly but aren't very filling.

You Will Meet A Tall Dark Stranger falls somewhere towards the light & airy end of the Woody Allen spectrum. Not that it's cheery. But it's full of wry chuckles, and its pacing and tone and ultimate message don't pack much punch.

Set in London, You Will Meet A Tall Dark Stranger features two couples whose marriages are starting to come apart. Sally (Naomi Watts), an art dealer's assistant who longs to run her own gallery, is married to Roy (Josh Brolin), a failing novelist. Each of them expresses their marital frustrations by developing a wandering eye. Sally falls for her new boss (Antonio Banderas) while Roy crushes on a new neighbor (the luminously radiant Freida Pinto, who became a star in Slumdog Millionaire 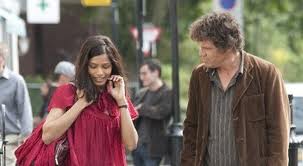 Roy (Josh Brolin) falls hard for Dia (Freida Pinto).
Who could blame him?
Meanwhile, Sally's middle-aged parents, Helena (Gemma Jones) and Alfie (Anthony Hopkins), each grapple with their impending dotage in wildly different ways. Helena falls under the spell of a psychic (Pauline Collins), who provides the prophecy that gives the movie its title, while Alfie undergoes a stereotypical male midlife crisis: he ditches his wife, buys a sports car, and shacks up with a younger bimbo (Lucy Punch) in some trendy new digs.

The movie moves deftly from scene to scene, and, if anything, the pace is a little too quick, so that none of the plot's developments has any weight. Normally, I'm not a fan of dramatic pauses or scenes which linger for effect, but this movie could have used a less frenetic rhythm.

On the other hand, the cast is terrific, though underutilized. The four leads are competent and engaging, given the wispiness of the script. Anthony Hopkins is the guiltiest at merely hitting his marks and spouting his lines, while Lucy Punch comes closest to stealing the show with her portrayal of a golddigger who never pretends she's anything else. And the slightness of Ewen Bremner's role is absolutely criminal.

The central theme of all of Woody Allen's work is the absurdity of existence, which lends a farcical quality to even his most serious movies. After all, he's not just saying that life is meaningless; he's saying life is a joke. Get the difference?

In You Will Meet A Tall Dark Stranger, this essential absurdity expresses itself in the fickle desires of the main characters, and the farce is in the way circumstances constantly confound those desires. Sally and Roy and Alfie and Helena all get varying measures of what they want, leavened with varying measures of what they seem to deserve, and it's telling that only the most deluded of the quartet seems actually happy.

And yet Allen's characters strive on, moving briskly from scene to scene in an endless parade of complication. It seems that Woody Allen is, at heart, an existential romantic, which is why the movie's most weighted line is about the relative merit of illusions versus medicine. After all, if the pursuit of happiness makes us feel some measure of achievement before we shuffle off this mortal coil, what's the harm in it? And what's the harm in having a few chuckles at the expense of other people's foibles, especially when they're so recognizably our own?

Allen makes all of this even more explicit with a cloying voiceover that quotes Shakespeare and provides pointed transitions from one plotline to the next. It's clear from this that Allen is making sure we realize that this movie means something. The trouble is, the narrators shoots his thematic load with his opening sentence, stealing thunder from the rest of the movie. Epigrams are supposed to evoke interest in the works they introduce, not render them redundant.

In the end, I have to say that You Will Meet A Tall Dark Stranger isn't one of Woody Allen's better movies. But neither is it one of his worst. And a mid-grade Woody Allen movie is still a pretty good way to wile away some time, kind of like going to a posh cocktail party full of interesting people you don't really care much about. You chat a bit, hear some colorful gossip, enjoy the champagne and caviar, and, the next morning, you go back to your real life.