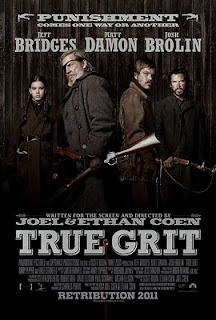 (The latest version of True Grit has arrived -- and the world is better for it!)
The Coen brothers have established themselves as one of the most original filmmakers in American cinema. Now, it may seem weird to speak of Joel & Ethan Coen as a single organism, but only if you don't already know that these two men are legendary for working so closely together that they seem telepathic.

In the beginning of their careers, they credited themselves as filling separate roles on a particular movie, with Ethan listed as producer while Joel got listed as director. In truth, however, they both did just about everything, from soup to nuts, and they apparently still do.

And since Blood Simple, they have created a body of work that is as idiosyncratic as it is entertaining, working in modes of highly stylized American vernacular & genre (from film noir to gangster drama, from romantic comedy to screwball caper) to tell stories that are violent and funny and visually stunning.

Not everything they do works. Notable failures of the Coen brothers include The Man Who Wasn't There and Intolerable Cruelty, both of which are still interesting to watch, if not exactly enjoyable.

Their remake of True Grit, however, is a consummate success.

I remember, in high school, getting into a discussion in class about John Wayne. When I argued that Rooster Cogburn was his best role, my teacher commented, "Well, if you like the movie so much, you should read the book."

Such was how I got introduced to the work of Charles Portis, a truly wonderful American writer whose work is woefully underappreciated. 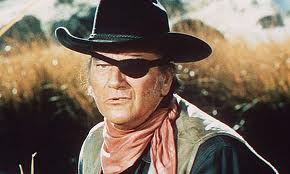 (John Wayne in the role that won him an Oscar.)
And John Wayne's Rooster Cogburn not only won him an Academy Award, it got him teamed up with Katharine Hepburn in a sequel whose screenplay was also penned by Portis, though the resulting movie (Rooster Cogburn) is itself something of a failure.

Still, it was exceedingly ambitious of the Coens to tackle the remake of a such an iconic work of American cinema. After all, they're known for films filled with irony and bleakness, a tonal palette that the Duke himself never had much truck with. 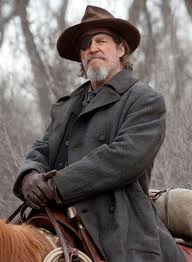 (Jeff Bridges plays Rooster Cogburn for the Coen brothers.)
But the new True Grit is, if anything, even more faithful to its source material than the first movie. While the 1969 adaptation used much of Portis's original dialog, the new adaptation uses even more of it. Indeed, the whole tone of this new True Grit is more in keeping with the novel that inspired it. There's an understated but very tactile grittiness to this movie that blows the Technicolored brightness of the first movie away.

And, forgive me, but Jeff Bridges is ten times the actor that John Wayne ever was. In the 1969 True Grit, the Duke was just playing another version of himself, and the Oscar he was given is largely considered a kind of lifetime achievement award rather than recognition for the worthiness of this particular role.

Meanwhile, in the Coen brothers' new version of True Grit, Jeff Bridges inhabits the role of Rooster Cogburn with a kind of full-bodied naturalism that John Wayne probably could never have imagined. As Bridges plays him, Marshall Cogburn is more flawed and more dangerous than the straightlaced Wayne would ever have allowed. While Wayne's Cogburn plays at being a bit tipsy at times, Bridges's Cogburn is completely and comically soused.

Also, while the first True Grit had an excellent supporting cast that included Robert Duvall and Dennis Hopper, it was done in by wooden performances from Glen Campbell (who contributed the title tune to the soundtrack) and Kim Darby. It's not that they're awful performances. But Glen Campbell is just playing himself, while Kim Darby's portrayal of Mattie Ross seems more plucky than strong. She just doesn't seem truly capable of keeping up with two experienced lawmen as they hunt down the man who killed her father. 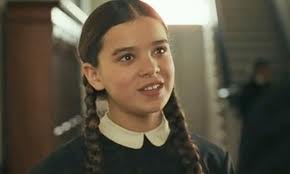 (Hailee Steinfeld as Mattie Ross)
The new True Grit outdoes its predecessor in this regard by having Matt Damon play the dandyish Texas Ranger LeBoeuf as both a fool and a hero, while Mattie Ross gets portrayed by ingenue Hailee Steinfeld, in what must be a starmaking turn. Not only does Steinfeld credibly conquer the rather arch dialog with aplomb, she also manages to hold her own onscreen with the likes of Bridges and Damon. Remember, her character is the primary agent of the plot, and Steinfeld's Mattie never relinquishes her place, even as Bridges begins chewing the scenery. Perhaps her best scene involves a parlay with the trader who sold her late father a string of ponies. It's a real pleasure to watch.

Josh Brolin and Barry Pepper also do yeoman's work in their respective roles as the bad guys, with Pepper being the more sympathetic of the two, as Pepper's Lucky Ned seems possessed of a certain amount of minimal honor that Brolin's Tom Chaney completely lacks. It strikes me that westerns are one of the last genres where bad guys are allowed to be all bad without also being caricatures of themselves. Even so, Rooster Cogburn isn't exactly wearing a white hat.

This being a Coen brothers' movie, I expected more quirkiness and more subversion. After all, these guys have a reputation for not leaving well enough alone. They'll throw sight-gags in amidst the most horrific violence (see Miller's Crossing) or include dialog that is a parody of itself (see Fargo).

But True Grit remains true. It's a straight-up western, full of beautiful vistas and deadly showdowns, where justice is rough and expensive while lives are cheap.

Sure, the dialog gets a little wordy, but it's funny, too. And it's in keeping with the spirit of the piece, which, for all its realistic trappings, is in fact a fable. True Grit is an archetypal re-telling of the eternal conflict between darkness and light, and, as such, it strikes a blow for all that is wondrous and sacred and worth fighting for, while delineating the razor-thin difference between vengeance and retribution.