Rock On: an office power ballad by Dan Kennedy 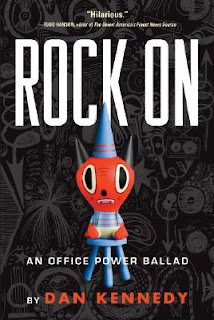 The subtitle of the U.K. version of Rock On by Dan Kennedy is especially enlightening.

Instead of the original "an office power ballad," the U.K. release goes "how I tried to stop caring about music and learned to love corporate rock." For me, the U.K. subtitle carries echoes of the subtitle to Stanley Kubrick's Dr. Strangelove. Kennedy's book is nowhere near as biting or as pointed as Kubrick's movie, but, in its own way, Rock On is just as funny and enjoyable.

Plus, the differing subtitles harken back to an age when domestic and foreign releases of rock albums were often different in ways that evoked a powerful exotic attraction in young, innocent music fans like me. I remember being enthralled by the ephemera separating the U.S. & U.K. editions of Sonic Youth's Bad Moon Rising, as if the difference in track listings was some magical form of arcana whose knowledge would grant me artistic wisdom, rather than being the result of such prosaic circumstances as licensing and packaging.

Like me and countless other children of the seventies, Dan Kennedy is nostalgic for a time when pop music was more art than business (or at least felt like it), and Rock On tells the story of the year-and-a-half that Kennedy spends working for Atlantic Records as a "director of creative development" starting in 2002.

Kennedy is a wonderful storyteller whose piece, "And How Does That Make You Feel?," is one of the best stories I've ever heard on the Moth podcast. He is also the author of a GQ piece, "Why I'm Cool (With Being Uncool)," that hit me a little too close to home, if you know what I mean.

As the book opens, Kennedy is in his thirties, past the starving-artist phase of his life and eager for some measurable measure of success. And he gets hired by Atlantic Records just in time to watch the company -- and the industry -- slowly collapse in on itself.

Kennedy quickly feels like he's in over his head. "My biggest qualification," he admits early on, "is simply this: I've loved music all my life." The corporate culture of a big-time record label is alien and foreboding to him, and, naturally, Kennedy's days are filled with fears of being exposed as an interloper in the corridors of music-industry power. Perhaps he is already unconsciously aware of the disasters that lie ahead.

What follows begins with a quick rundown of Kennedy's musical aspirations and efforts, which mainly consist of dressing up as Gene Simmons from KISS at Halloween, followed by a string of record store jobs and abortive gigs as a drummer, all told in a self-aware, conversational style that takes self-deprecating to heights not seen since the early work of Woody Allen. This establishes Kennedy's bonafides as an ardent-fan-cum-unwitting-insider to a dying industry that, essentially, raised him.

In a sign of things to come, his first assignment is to create advertising for a greatest-hits compilation by Phil Collins, the man who made Genesis go from prog-rock to pop. Kennedy spends a chapter agonizing over how to come up with cogent, market-savvy taglines for this album, only to have his conundrum resolved in a hilariously fitting fashion. And so he moves on to his next project.

In between chapters of this memoir, Kennedy includes such hilarious asides as "So You Wanna Be A Chart-Topping Rock-And-Roll Star Embraced By Major-Label Marketing Executives And Corporate Radio, Well Listen Now To What I Say." This is a short interlude listing the mannerisms that each member of a rock band (Lead Singer, Lead Guitarist, Bassist, Drummer) should adopt in order to exude the requisite amount of talent and energy needed to ascend to the pop culture firmament. Of particular note are the "moves" that the Lead Singer should make. It's cutting enough to undermine even the most ardent rock-and-roll performance for you.

Except that it doesn't -- not even for Kennedy, which he vividly portrays in a chapter called, "The Salvation of Stooges," recounting an amazing performance by Iggy Pop that reduces all the corporate politics, the industry machinations, and Kennedy's own self-doubts to smoking smithereens beneath the passionate onslaught of Iggy Pop's relentless showmanship. It's a bravura moment that proves that the spirit of rock-and-roll ain't dead -- it's just a rare, blessed thing that can arouse the core of your being and leave you breathless (and a little ashamed of yourself).

But corporate life soon reasserts itself. After many anecdotes involving such major acts as Fat Joe and Jewel, Kennedy's memoir turns to the assimilation of Atlantic Records by the Warner Music Group. It's a slow, painful winding down made entertaining by Kennedy's voice and his eye for telling detail. His account of an in-store performance by The Darkness, with its attendant undertones of office politics encapsulated by Kennedy's confusion about how and when to use his camera, is pitch-perfect, ending with a line that signals his own unwilling-but-unwitting assimilation into the soulless hierarchy of the corporation.

Fear not, potential readers. I give nothing away by telling you that Kennedy gets himself thrown clear of the wreckage. Sure, he ends the memoir as an unemployed layabout (who, a bit dramatically, catches a glimpse of Jimmy Page on Wall Street), but he also ends up writing this book, which itself ends with a series of tacked-on appendices that include Kennedy's own prescription for the music industry, ironically entitled "My Six-Point System For Saving The Record Business," that is then followed up by some correspondence between Kennedy and his book editor. This, in turn, is followed by a tongue-in-cheek guide for Kennedy's readers, should they feel compelled to discuss the book in groups. It's the kind of self-referential wind-up one should expect from an alum of McSweeney's.

Still, it works, and I have to recommend this book to anyone wishing for a ringside seat at the implosion of the industry that gave us the soundtrack of our lives.