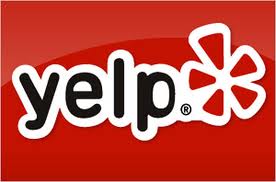 Billed as a "Black-and-White Yuletide," it was held at Republic Kitchen & Bar for Yelp Elite Squad members to celebrate the holiday season with some drinks, some snacks, and a cool little scavenger hunt where I was one of the clues.

Because I was a little late, most of the guests had pretty much finished their hunting, leaving me as their final clue -- which meant that I basically got mobbed when I walked in. For a moment, I really felt like a rock star, giving out autographs and getting to gladhand so many strangers.

The Princess just took a seat nearby and laughed as I schmoozed. I know it was just so they could complete their scavenger hunts and thus qualify for a door prize, but all the attention was nonetheless gratifying. Call me vain, but I'll take all the affirmation I can get, even if it's fueled by gameplay. 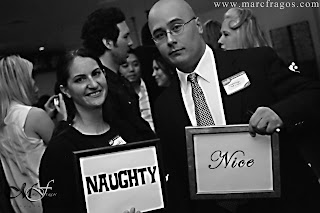 (Me being "Nice" with Yelper Elizabeth.)
(Photo courtesy of Marc Fragos, a total stud photographer.)
Among the many in attendance was P.J. Perez, whose work includes The Utopian and the incredible Tales from the Boneyard. He was beyond friendly and could not have been more welcoming to a rube like me. 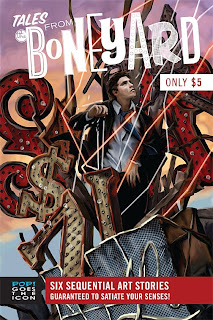 P.J. Perez's Tales From The Boneyard
is too effing cool...
And I also got to meet Matthew O'Brien, whose latest book is My Week At The Blue Angel, a wonderful collection of Las Vegas nonfiction based on work he did for Las Vegas CityLife. His first book, Beneath the Neon: Life & Death in the Tunnels of Las Vegas, is a must-read for knowledgeable locals. Once I finish his new book, I'm sure I'll feel the same way about it, too.

Matthew was also very warm and welcoming, and he even nodded appreciatively while I talked his ear off about my aspirations like a starstruck groupie. I had brought along a copy of My Week At The Blue Angel, which he graciously inscribed as if I were his peer.

Misti capped off the evening by raffling off door prizes to everyone who had completed their scavenger hunt. Among the prizes were a couple of copies of Bloodsucking Vegas, which went to a couple of Yelp Elite Squad members who had already expressed great interest in the book. Plus, they were both half-filipino like me, which we'd joked about, so it felt like my books went to family.

Rob, a Yelper who is also a budding writer, bought me a much-needed beer, and I ended up sharing a couple of shots of some weird drink that apparently had espresso & alcohol in it with some other Yelpers. As I'm a real lightweight, I soon had to beg off and get out of there right after the raffle because those shots really hit me hard.

In all, it was a very fun night. It's always nice meeting new people, especially ones as cheerful and friendly as these Yelp Elite Squad members. I hope to do it again sometime.

Thanks for inviting me, Misti.