(Note: Those looking for the first chapters of Bloodsucking Vegas can find them here.) 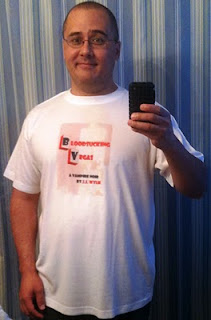 (I need to find a better t-shirt model...)
So, for Christmas, the Princess and I fled the threatening weather of Las Vegas for the perfect environs of Colorado Springs.

And I mean perfect. While clouds and sprinkles have been rolling through Sin City, Colorado Springs has sunny skies, and the only visible snow is on the surrounding mountains. Plus, there's just enough of a nip in the air to make it feel like Christmas. Normally, I hate any hint of cold, but it seems seasonally appropriate (especially for a warm-weather wimp like me) to have just enough chill to need a jacket when you're outside.

Even the frustrations of having to engage in the TSA's "security theater" at the airport were quickly washed away once we emerged from baggage claim into the warm embrace of the Princess's family.

The Christmas mood was so strong, in fact, that I actually accompanied the nephews to a Christmas Eve service at their church. And I enjoyed it. As I've said before, nothing beats genuine fellowship for celebrating a holiday, and the breathless earnestness of the Princess's nephews as they sang a Christmas carol was more than enough to melt the icy heart of a Grinch like me.

The nephews also talked their parents into letting them open most of their presents on Christmas Eve, leaving only the gifts that Santa Clause would bring through the chimney for Christmas morning. Smart boys. This strategy gave them essentially 2 rounds of presents. 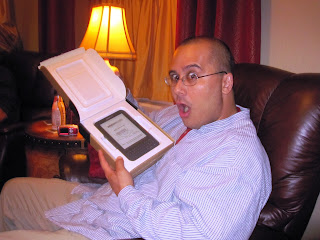 (Someone got their naughty & nice lists mixed up!)
The nephews got me a Kindle, which I've spent the last day filling with textual goodness. Not only has the Kindle effortlessly imported all the material from my Kindle apps on my Iphone & laptop; it also has a neat feature allowing me to email other documents to my Kindle, including pdf files, Word docs, and non-Kindle e-book formats like mobi. What's more, the Kindle plays mp3's, which automatically makes it my travel-distraction device of choice.

But the most remarkable gift I got was from the Princess's mother, who made me the t-shirt you see at the top of this post. Despite my misgivings about the design of my book cover, the t-shirt looks great, and I'm sure it'll look even better when someone attractive is wearing it.

The hospitality we've received from the Princess's brother and sister-in-law has been warm and generous, and I've had a blast getting whipped by the nephews on the Wii as we play Kung-Fu Panda and Wii Sports Bowling.

After another couple of days of holiday reverie, the Princess and I will make our way back to Las Vegas to resume our lives. I expect we'll be radiating a little Christmas glow well into the new year.