Advice for Writers: Beware of Ideas 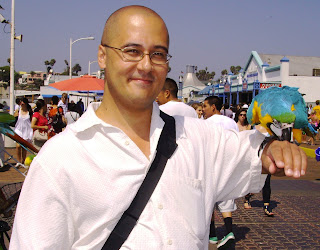 (So the parrot tells me he's got this idea for a screenplay...)
More successful writers than me must get bombarded by this phrase: "Um, I have this idea...."

People say it to me all the time, and I always play along, mainly out of politeness. And, you never know, I might actually hear a usable idea someday.

But the notion that a working writer needs ideas betrays a naive sense of the writing process.

It seems that most people think of writing (or of any creative endeavor) this way: an artist gets inspired by an idea and then, in a kind of frenzy, disgorges a work of art. To put it more colorfully, an artist gets struck by a bolt of inspiration and, filled with this blast of magical energy, quickly fashions a finished piece. To put it even more colorfully, the process is like sex: the artist gets turned on, and then feverishly bangs out their art.

Artworks, then, are the orgasms of the creative process. (Then what, you ask, are babies? Well, to extend the metaphor, babies are artworks that bear fruit, in the form of fame or fortune or both.)

But the truth is (forgive me) far more prosaic.

For every successful artist I know, whether they're a writer or not, the true process goes like this: the artist shows up at their workplace with the regularity of a wage-slave, grinding through hours of composition until they've created a large enough mass of work that they can then edit & revise into something worth sharing with the rest of the world.

And, as often as not, their work never really feels finished. It just reaches a point where further effort is fruitless or prohibited by circumstance (like deadlines). I think it was E.M. Forster, channeling Da Vinci, who said, "A work of art is never finished. It is merely abandoned."

The process is continuous, regimented, and often monotonous, which is why movies about writers rarely get it right. It really is like watching paint dry -- layer after layer of it.

And this is why ideas, especially those of other people, are rarely helpful. They can even get in the way.

I don't mean to say that ideas aren't necessary for a writer. Every artist I know keeps some sort of notebook where they store their ideas for later review.

But, at any given time, a committed writer is engaged in an ongoing & specific process with an existing work, so any suggestions from well-meaning passersby would likely serve only to interrupt this process.

For example, right now, I'm in the process of drafting a manuscript for my next novel. It's a kind of action comedy involving a really convoluted plotline that includes a doppelganger, a serial killer, an artificial intelligence, and some recent Las Vegas history. I'm struggling daily with the problem of combining these disparate elements into a coherent and entertaining story, and my current solution is to create an overarching narrative who may or may not be an actual character. So, how helpful is it when a well-meaning friend walks up and says, "Um, I have this idea for a zombie story that takes place at Circus Circus..."?

It's like you're working in the hold of a sinking ship, trying to plug leaks, when someone walks up and says, "You know, I think you should think about becoming an airplane mechanic."

I'm reminded here of people who have unrealistic notions of what it takes to be a professional poker player. The popular notion is that being a full-time gambler must be glamorous and magical and endlessly rewarding, but the truth is that every person I've ever known who is a successful poker player spends long, tough hours working at it, enduring setback after setback while slogging through countless uneventful hands towards their ultimate goal. While it takes skill, talent, and certain amount of luck to win a poker tournament, it also takes a huge measure of stamina.

In his novel, Hollywood, Charles Bukowski writes about being a writer:


I liked to watch the fights. Somehow it reminded me of writing. You needed the same thing, talent, guts and condition. You were never a writer. You had to become a writer each time you sat down in front of the machine. What was hard sometimes was finding that chair and sitting in it. Sometimes you couldn't sit in it. Like everybody else in the world, for you, things got in the way: small troubles, big troubles, continuous slammings and bangings. You had to be in condition to endure what was trying to kill you.

Another curmudgeon, Ezra Pound, put it more succinctly in his ABC of Reading:  "More writers fail from lack of character than from lack of intelligence."

So, you see, it isn't a lack of ideas that's keeping me from being a more successful writer. It's a lack of time & effort spent working through a process for long enough to have created more work that's at the stage where it can be abandoned to the marketplace. This is what I get for spending the first half of my life NOT pursuing my writing career.

Still, if you walk up to me and say, "Um, I have this idea..." then I'm going to listen. I may even engage in a conversation with you about your idea. I do this out of a sense of fellowship and courtesy and a vague hope that you'll actually say something I can actually use.

Just don't presume I need your idea. I got my own problems.