Self-Publishing Suckage: the regret of an independent author 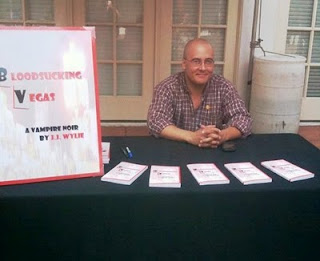 (Me at the Vegas Valley Book Festival on November 6th)
Last July, I used CreateSpace to publish my first novel, a vampire thriller called Bloodsucking Vegas: a vampire noir. I did so with an abundance of hope and a certain measure of fear. After all, I was an unknown author venturing into a treacherous marketplace without any help or guidance from an agent, an editor, or a big, established publishing house.

What I did have was an unshakeable belief in what I had created: an entertaining potboiler that was both a variation on -- and an homage to -- a genre that has permeated our popular culture. Call it hubris, if you like. Plus, for a guy who was raised on a steady diet of B-movies and pulp fiction, the book was incredibly fun to write.

Now, I knew I hadn't written the Great American Novel; nor did I mean to. The creation of Bloodsucking Vegas: a vampire noir was less about art than it was about craft. I had crafted a deliberate entertainment designed to follow some rules of genre while breaking certain others, all in the spirit of play.

I also had the example of other artists (such as Cory Doctorow, Jonathan Coulton, and the band OK Go) who have foregone the traditional means of using a vertically-integrated corporation to represent them in the marketplace. Instead, these artists rely on the internet and social media to engender interest and to propagate their particular products. Like them, I seized the opportunity to determine both the production and the distribution of my work.

And now, roughly 5 months since the release of Bloodsucking Vegas: a vampire noir, I'm taking the time to assess what I've accomplished and learned (or not).

Since Bloodsucking Vegas: a vampire noir "went live" on July 14th, I've sold a few hundred copies, and I've given away almost as many, sending them to everyone from family members and local newspapers to radio stations and independent bookstores.

The response I've gotten from readers of the book has been overwhelmingly positive, which is gratifying. The few criticisms I've received have been categorical in nature, from people who just hate vampires or who object to any depictions of sex and violence. In essence, the only negative comments I've gotten have come from people who already dislike the type of entertainment that my book is an example of.

All I can say to that is the finest whiskey will never please an ardent teetotaller.

But the more troubling response to Bloodsucking Vegas: a vampire noir has come from the marketplace itself -- in the form of a deafening silence. Media organs (the antennae of the industry) have largely ignored my attempts to contact them, and bookstores have balked at my attempts to furnish them with my product.

True, there are technical and circumstantial hurdles to my entry into the mainstream marketplace. My book's cover absolutely sucks because I couldn't find a graphic designer in time. I do not have a publicist out beating the bushes in order to flush attention towards my work, and my book has not (yet) been accepted for distribution by one of the big wholesalers like Ingram. But I have addressed these particular hurdles with complimentary review copies and attractive invoicing terms.

So I can boil down the real reason for such resistance to my book to a single notion: the negative stigma attached to the self-published work.

On a personal note, it's one thing to have someone react negatively to your creation. An artist can live with the notion that their work rubs some people the wrong way. But to have your work summarily dismissed without a glance is especially frustrating. It's like getting found guilty of a crime without the benefit of a trial.

And I was warned. More than one person admonished me to resist the easy path of self-publishing because of the tarnish of vanity that could stain my artistic reputation, such as it was (or is). It's a stain, I've been told, that could taint my entire career (should I manage to ever have one).

Yet I plunged onward, into the breach of independent publishing, cocksure in my idealistic fervor that quality -- like murder -- will out.

So here I am, 5 months into my publishing career with a book I can easily give away but have a hard time selling. It's like I'm throwing copies of my book into a hole, never hearing them hit bottom.

Do I sound bitter? Well, I shouldn't. All I've done so far is taken the measure of the obstacles in front of me. I haven't actually given up.

But I will concede the following: The stigma of self-publishing is richly deserved.

I'll say it again, in more direct terms: Almost all self-published authors absolutely suck. And their work isn't worth what it is printed on, be it paper or the screen of a Kindle.

The media and the marketplace are right to be suspicious of independent authors. In my experience (and I say this with the full knowledge of how self-aggrandizing it sounds), I am just about the only self-published author worth reading.

I am being quite serious about this. Since the (self)publication of Bloodsucking Vegas: a vampire noir, I have made a concerted effort to acquaint myself with the works of my fellow independents, looking for kindred souls who might want to partner up for a book-signing or two. And I have been stunned by the pervasively sorry quality of what I've found.

Whether it's a historical novel, a romance, an autobiography, or a regional history, not only is the vast majority of self-published work written at a truly awful level of craftsmanship; it often lacks competent levels of copy-editing. Examples I've found include the number "1" where the pronoun "I" should be, blatant anachronisms, shifting verb tenses where the present and the past are inconsistently commingled, and rampant misspellings. This is writing that would doom a high-school term paper, let alone a published book.

But it isn't my intention to throw stones at individual authors or books, so I'm not going to name names. I'm making a larger point here, besides the fact that my single biggest regret since the publication of Bloodsucking Vegas: a vampire noir

is that my book has been stigmatized with the taint created by what surrounds it.

My larger point is this: Until the overall level of quality in independent authorship rises, books like mine are like little chips of diamond buried in a mountain of sewage. I had a vague idea of this before publishing my novel, but, in the 5 months since the release of Bloodsucking Vegas: a vampire noir, my sense of this proportion has only grown more acute.

So, in the end, I maintain my naive and idealistic conviction that the quality of my book will eventually be recognized. It's just that, since this past July, I've become painfully intimate with the layers of dreck that Bloodsucking Vegas: a vampire noir will have to rise through. These layers are deep and thick and smelly, and I sympathize with anyone who regards these piles of the self-published with horror.

I now have a better appreciation of agents and publishers as gatekeepers of quality. But I still stand by my assessment of my own novel. The quality of Bloodsucking Vegas: a vampire noir is as high as anything in its genre. It needed no gatekeepers to moderate its access to the marketplace.

Still, it would be nice to have the services of a marketing team!

Now, I realize that a call for better quality amongst the rank-and-file self-published is tantamount to a cry for increased literacy across the board. In other words, I know that the very nature of the self-publishing industry prevents the installation of market-wide artistic standards. We can't all be Shakespeare, even though each of us has, within our grasp, more publishing power than he ever dreamed of.

But isn't it pretty to think so?

Fellow independent authors, it's true we have the tools to conquer the marketplace without the help of agents or editors or publishing conglomerates. We can be revolutionaries, overthrowing the tyranny of a marketplace ruled by a few, elite publishers. But we won't win until we become better craftsmen (and women).