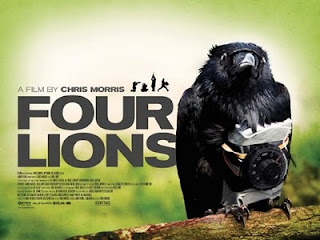 ('Four Lions' is directed by Chris Morris)
The British film 'Four Lions' opens with an image that, sadly, has become familiar to all of us. A bearded jihadist sits, staring into the camera, and eventually begins spouting a strident, violent rationalization for his actions -- except that this particular jihadist is speaking northern English slang and he's holding a toy assault-rifle. And the man filming him starts telling him how stupid he looks. 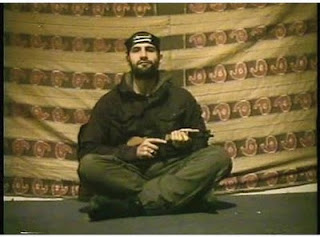 (Waj tries to come off as a badass.)
So there's a kind of fearlessness in 'Four Lions' that I have to tip my hat to. After all, in this day and age, while it's common to see funny movies about criminals, you just don't see many comedies starring terrorists. And, it's my firm belief that, given our current national climate, there's no way 'Four Lions' would even get made in the U.S. Our atmosphere is too polarized to entertain satire that's this pointed, which is kind of sad in a country that prides itself on free speech.

But I subscribe to the notion that no subject is so sacrosanct that you can't find a way to laugh at it. And 'Four Lions' is full of laughs, especially the kind where you're shaking your head at the same time.

Despite its title, the setup is this: 5 British muslims are planning a suicide bomb attack in the name of jihad. There are, of course, all kinds of problems attendant to such a course of action, but the major hurdle these men face is that, besides the fact they've bought into a murderous fringe ideology, they're also idiots.

There's Omar, the supposed brains of the bunch, living a nice, middle-class surburban life with his wife and son but harboring dark resentments towards the society that surrounds him. There's Waj, Omar's sidekick, an airhead who seems to think being a terrorist is like being a rock star. There's Fessal, a bumbling, nearly-invisible shuffler whose own idea of jihad is teaching crows to fly bombs into buildings. There's Hassan, a young, rich, impressionable layabout who seems to think he's joined some kind of fraternity. And there's Barry, the white-skinned convert, whose pathology is particularly troubling, involving perversions that are only hinted at onscreen.

This quintet meets in secret, conducting themselves as an underground cell of Al-Qaeda, and the comedy of the situation is that none of these losers is nearly as smart or as capable as they think they are. They make their farewell videos and assemble their explosive ingredients, all the while bickering about what their target should be. And these arguments do nothing more than highlight their stupidity, which is vast and dangerous.

This becomes starkly apparent when Omar & Waj actually travel to Pakistan to meet with real terrorists, who size the pair up quickly as morons but who nevertheless agree to train our heroes in the ways of jihad, with particularly disastrous consequences. Indeed, it's only after the ending credits begin to roll that we are shown just how comically dire those consequences are. (I give nothing away by saying it's a coda that purports to explain why, as of this date, we've never been able to apprehend Osama bin Laden.)

The dialog comes quick, thickly-laden with accent and slang, but the rewards for paying close attention are immense. For me, there's nothing funnier than a misappropriated ideology, and the arguments between these daft twats are hilarious as they discuss the merits of various possible targets for their bombs. Barry (played by Nigel Lindsay) is a show-stealer in many of these scenes, as he argues that the most effective target for their jihad would be a local mosque, and his convoluted reasoning manifests itself as physical comedy. I guess it brings out the jack-ass in me to laugh at a man who punches himself in the face to prove a point. But I doubt I'm alone.

And many points get made in 'Four Lions,' where the target isn't so much Islam as it is fundamentalism (and its attendant inconsistencies & hypocrisies), especially the kind of literalism as expressed by Ahmed, a well-meaning, nonviolent cleric from the very mosque that Barry wants to blow up, whose interpretation of his religion means Ahmed can't even be in the same room as a woman. Ahmed knows what Omar is planning, but he does nothing about it, except to repeatedly try to talk to Omar about it. He's the classic ineffectual intellectual, hamstrung & cowardly.

In fact, there isn't a character in 'Four Kings' who gets off scot-free, from the police to Omar's confused boss, which, for me, only strengthens the movie's sense of realism, since the world itself is essentially farcical, is it not? 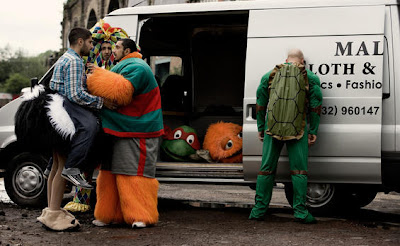 (Our heroes bicker while on their self-appointed mission.)
But there's also real heart in 'Four Lions' as well. It turns out Omar is a pretty good father, and his marriage seems based on real affection. Also, his friendship with Waj is genuine, and you get the feeling these buddies are as much hapless victims of their beliefs as their intended targets are. Despite their homicidal intent, Omar & Waj become sympathetic characters of a sort. Still, they've trapped themselves in a bloody farce.

As in all farces, a rough kind of justice is served up in 'Four Lions' as our heroes finally get their due, though there's a lot of collateral damage, too, which is only fitting in a film about terrorism. It turns out that the bombs these idiots have assembled really do blow up, in ways that will make you laugh shamefacedly, despite the carnage.