The Tiger by John Vaillant 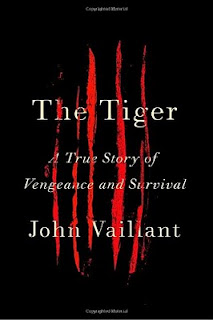 The Tiger: A True Story of Vengeance and Survival
by John Vaillant
As I've mentioned before, I make a habit of reading several books at once. Most times, it's 3 or 4 books, but sometimes it's as many as 6. I've been doing this my whole life, so it seems a bit silly to list rational reasons for this behavior. My compulsion for reading is as ingrained as my compulsion to breathe. In fact, I have trouble falling asleep at night if I don't read something first.

But I think one of the main reasons I read several titles at once is that, as much as I am compelled to read, I am also a creature of moods. And keeping a variety of books at hand is a way of always having a book that matches my current mood. Sometimes I feel more like digesting a bit of biography rather than getting entranced by the plot twists of a piece of crime fiction. Other times I feel like taking in a bit of history rather than enjoying the music & profundity of a volume of poetry. It's good to have variety in one's diet, is it not?

Now, every once in a while, one of the books I'm reading will eclipse all the others, enthralling me so that I stop reading anything else. The other books just have to wait, like so many pining bridesmaids, until I finish with this new favorite.

Not only is John Vaillant's The Tiger: A True Story of Vengeance and Survival just such a book, but I also read it 3 times through before it released me from its spell.

That's right: for the past week or so, I have read and re-read nothing else but this amazing book. It's that magical.

The Tiger begins with a cliffhanger of a prologue, and then proceeds towards a horrific scene where a man has been devoured so completely that there is literally almost nothing left to bury. What could have done this, considering that the man was armed and well-versed in survival techniques? Though the answer is obvious, given the book's title, the reasons for this attack are complex and chilling. It turns out that the devourer acted on motives that are, paradoxically, all-too-human.

Set in a remote corner of eastern Russia just north of China, The Tiger tells the tale of a man-eating tiger that went on a rampage in December of 1997, terrorizing a remote village full of experienced hunters. A team of rangers is called into action to track this tiger, and the resulting showdown is so mindblowingly cinematic that, as of this writing, news reports are circulating that a movie adaptation of this book is in the works, with Brad Pitt already attached.

However, I don't suggest waiting for a movie version. Indeed, part of what makes The Tiger such a wonderful experience is the lyrical & comprehensive way that John Vaillant builds the truly exotic world in which this story takes place. Chapters alternate between a kind of real-time re-enactment of the tiger's attacks (and the resulting chase by the rangers) and the author's prodigious research into the history and ecology of the area.

The context that Vaillant builds into his book is as important as the action itself, because such context gives weight and meaning to what happens, so that we begin to understand why this particular tiger acted the way it did. And the author is able to weave these alternating chapters into a seamless narrative, which is a testament to his skill as a writer. Even on my third pass, I marvelled at how well this book is built.

Here, Vaillant describes the particular species of tiger that his book deals with:


"To properly appreciate such an animal, it is most instructive to start at the beginning: picture the grotesquely muscled head of a pit bull and then imagine how it might look if the pit bull weighed a quarter of a ton. Add to this fangs the length of a finger backed up by rows of slicing teeth capable of cutting through the heaviest bone. Consider then the claws: a hybrid of meat hook and stiletto that can attain four inches along the outer curve, a length comparable to the talons on a velociraptor. Now, imagine the vehicle for all of this: nine feet or more from nose to tail, and three and a half feet high at the shoulder. Finally, emblazon this beast with a primordial calligraphy: black brushstrokes on a field of russet and cream, and wonder at our strange fortune to coexist with such a creature. (The tiger is, literally, tattooed: if you were to shave one bald, its stripes would still be visible, integral to its skin.) Able to swim for miles and kill an animal many times its size, the tiger also possesses the brute strength to drag an awkward, thousand-pound carcass through the forest for fifty or a hundred yards before consuming it."

Truly, this is a formidable beast, and Vaillant does a great job of explaining "our strange fortune to coexist with such a creature." It turns out that our history with tigers is long and complicated and fascinating.

Tigers are the kind of large predators that humans have been dealing with since before we civilized the planet, and their influence on us has been profound. But, in the last century or so, humanity has had a more profound effect on the tiger, and it is this effect that is the true theme of the book. In fact, Vaillant argues that this effect (in terms of poaching and loss of habitat) is the real cause of the titular tiger's rampage.

Indeed, although The Tiger is structured much like a police procedural, with the tiger's attacks being the crimes which set the climactic hunt into motion, the book ends up being about much, much more. In reading it, I learned a lot about Russian history and the current economic chaos (spurred by China) that has enveloped this area. And, besides the telling of a spellbinding adventure, the author offers up the following justification for his story in the epilogue:


"In order to appreciate the true value of this animal -- the necessity of this animal -- humans need reference points that mesh with their own self-interest. Probably the most compelling of these, beyond the sublime image of a tiger in the wild, is the fact that an environment inhabited by tigers is, by definition, healthy. If there is enough land, cover, water, and game to support a keystone species like this, it implies that all the creatures beneath it are present and accounted for, and that the ecosystem is intact. In this sense, the tiger represents an enormous canary in the biological coal mine. Environments in which tigers have been wiped out are often damaged in other ways as well: the game is gone and, in many cases, the forests are, too."

In short, John Vaillant has brilliantly used this particular incidence of a tiger gone rogue as a window through which we can see how humanity is affecting our environment, often in ways that do not bode well for our collective future.

The final confrontation with the tiger is, as I've said, an unbelievably cinematic moment, with at least one detail that would have struck me as too far-fetched had I encountered it in a work of fiction. As it is, it's a scene that left me shaking my head in appreciation.

In its blend of thriller, history, and ecology, The Tiger is a compelling and entertaining book, rife with indelible images and import. I heartily recommend it.


The Tiger: A True Story of Vengeance and Survival
by John Vaillant
jjwylie@gmail.com
www.jjwylie.com
Posted by JJ Wylie at 8:21 PM