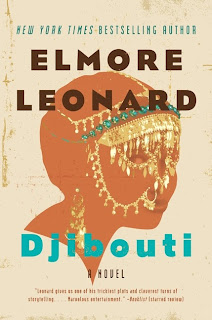 Djibouti: A Novel
by Elmore Leonard
Elmore Leonard is one cool operator. Now in his eighties, with over forty novels to his credit (a large number of which have been adapted for the movies), Mr. Leonard is still working his beat, creating lean, dialog-driven crime-fiction that features more chuckles than gunplay (and there is always gunplay).
Here's a representative sample from his new novel:

"It was on the History Channel all the ships he owns. You ever watch it?"

"I love the History Channel."

"You never saw it in your life."

In Djibouti, Leonard's 44th novel, he has shifted locales, setting his story in the horn of Africa rather than the streets of America. But longtime readers of Leonard's novels will feel right at home from the opening chapter, recognizing the trademark style of the prose, which scans like a screenplay and includes a motley assemblage of characters, none of whom seem to quite trust each other, for what usually turn out to be very good reasons.

There's Dara, the beautiful, Oscar-winning filmmaker who's come to town to do a documentary on Somali piracy. There's Xavier, her big, worldly sidekick, an impossibly agile septuagenarian whose feelings for Dara may be more than collegial. There's Harry, the Saudi diplomat who's ostensibly in town to try to talk some sense to the pirates. There's Idris, a pirate who's made good but who seems nostalgic for action on the high seas.

And, of course, there's more, including some terrorists, some tourists, and a large tanker full of dangerously volatile natural gas. Oh, and there's a billionaire Texan sailing around with a super-powered rifle and a model who's auditioning to become his wife.

As I've mentioned, in Djibouti as in all of Leonard's novels, there's not much exposition. And we get no pungent, thickly-worded descriptions of place. Nor do we get any of that prosaic riffing that fattens the pages of many contemporary novels. No, in Djibouti, it's all talk and action, but mainly it's talk, the give-and-take of characters making their moves and testing one another. Nearly everyone in an Elmore Leonard novel knows more than they're saying, and they're all anxious about saying too much. Even the cockiest character worries about looking stupid, which is only natural in a world where everyone is playing some sort of angle, whether it's legal or not.

Some of this can lead to exchanges that get a bit cute, and certainly some of the scenes between Dara and Xavier fall into this category. So I realize that there are those who don't enjoy Leonard's way with dialog, where characters knowingly exchange barbs the way boxers use jabs to test their opponents' reach. This can lead to scenes that are just so coolly cinematic that detractors could argue that it's best to wait for the inevitable silver-screen adaptation. But I think it's fun as hell to read.

And not everything Leonard is doing in Djibouti is old-hat. There's an interesting back-and-forth in the first half of the book with chapters that unfold in "real-time" and some smaller, more intimate chapters where Dara and Xavier are looking at the footage they've shot, narrating to each other the events of the story. It's as metafictional as Elmore Leonard is ever going to get, and the fact that it's dialog between his main characters as they look at video footage sets up some connotations that resonate slyly, given what we all know of Leonard's own relationship with Hollywood. He even manages to include a casting suggestion or two.

Crime fiction works best when it illuminates the interplay between our best impulses and our worst. Leonard knows this, and he also knows that our worst impulses stem from our deepest desires, becoming itches we can't stop scratching. This is why his plots are not the clockwork conspiracies of other thriller writers. Instead, Leonard's plots are half-assed improvisations, driven more by the vagaries of personality & appetite than by some sort of evil puppet-mastery. Indeed, the real villain in Djibouti (and there is one who stands out more than the rest) seems to be motivated more by a cardinal sin than by any criminal logic.

In this sense, Djibouti is as realistic as it gets, never mind the fact that some of the more "current-event" aspects of the novel (the Islamic terrorist angle, for instance) feel tacked-on like so much window-dressing. Sure, the bad guys are dangerous and resourceful, but they're also impulsive. Most crimes are. It's just that, in a story like Djibouti, the stakes are explosively high.

In the end, I have to recommend Elmore Leonard's Djibouti. But I recognize it's probably an acquired taste. I myself acquired it long ago. In fact, I'm addicted.