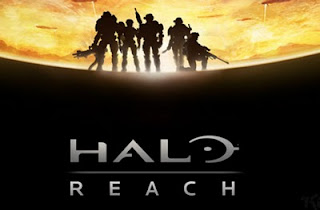 Halo Reach
I know. I know. There's something ridiculous about a middle-aged man playing video games. But I'm getting more and more comfortable with my ridiculous side. I'm too old to deny who I am.

And I've been a fan of the HALO franchise since its opening chapter. The first HALO game came with the Xbox console that Brother Juan brought home in late 2001, and its cutting-edge graphics and frantic, first-person gameplay provided us with hours of cooperative fun.

And now comes the fifth iteration of the game: HALO Reach, a kind of prequel to the first 3 chapters of the saga (and their lesser cousin, the much-maligned but still enjoyable HALO 3: ODST release).

The cooperative aspect really enhanced the game for me. I've never really been very good at video games, so having a partner along to help me through the advancing difficulties of HALO was a real bonus. HALO is fun as a game, but it's even more fun as a party.

But what really hooked me on HALO was the storyline. As a boy, I ingested a steady diet of science-fiction, comic books, and action movies, and the saga of the Master Chief's struggles to save humanity from an alien invasion really got my juices flowing. I guess it always helps to feel like what you're doing has a purpose, and the fictive framework of HALO provided it.

And what a story it is: humanity has spread across interstellar space only to encounter an alien confederation that, because of religious fervor, has decided to eradicate us. Outnumbered and outgunned, mankind retreats from yet another defeat in battle only to stumble upon a fantastic relic from an ancient civilization that may hold the key to our salvation -- or to the destruction of all life in the galaxy!

Talk about playing for high stakes!

But seriously, my point is that the storyline of HALO has real depth and intelligence. It isn't a tacked-on excuse for gameplay pyrotechnics. Rather, it has enough heft to contextualize the gameplay, giving it consequence and allowing the player to feel like an active participant in the narrative. In other words, as you play, you begin to feel less like an immature slob gripping a controller and more like a soldier fighting for a cause.

Call it narrative immersion. Call it gameplay-induced hypnosis. Call it delusions of grandeur. Call it what you will. But it's been working for me for almost a decade now, and I'm glad to say that the new HALO Reach has not disappointed me.

Brother Juan brought it home on its release date last week, and I've been playing it daily ever since. I've worked my way through to its final chapter, and, even though I have a low preconception of prequels (just take a look at what George Lucas did with his prequels to the original Star Wars trilogy!), I'm glad to note that the HALO Reach chapter of the story is as dramatic and consequential as the original chapters of the HALO trilogy. 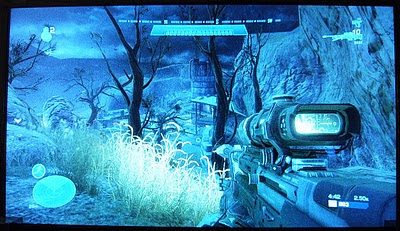 (This is me, sniping aliens in HALO Reach.)
Now, this being the fifth time that a game has been released that is based on the HALO universe, HALO Reach has many elements that will strike us fanboys as being old-hat. Brother Juan, who is less invested in the narrative aspect of the game than I am, has quickly tired of HALO Reach, and he has proclaimed that the game offers him little that is new.

And, to a large extent, he's right. Except for the addition of a couple of new vehicles and weapons and aliens, HALO Reach is largely the same game that HALO 3 was.

This is where my own immersion in the narrative saves me (or dooms me, depending on your perspective).

Sure, HALO Reach has much of the same gameplay as the previous iterations. As you play, you're either attacking or defending aliens in order to obtain or protect something. But, because I am so invested in the overarching story, these repetitious scenarios have context and depth. They are not so much rehashings of previous gameplays as they are chapters in a developing story -- a story that purports to have significant consequences for the future. For me, anyway.

Feeling like part of a story is how most of us establish meaning in our lives. This holds true for religion & politics & family, and our most fervent conflicts come about when one story impinges on another. It also holds true for our entertainments.

And the HALO saga provides at least the illusion of such meaning in the form of an addictive video game. There are worst ways to waste your time, ridiculous or not.