The Strain by Guillermo del Toro and Chuck Hogan 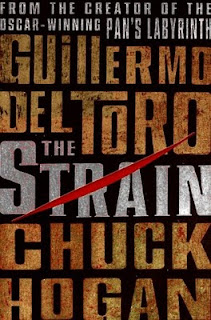 The Strain (The Strain Trilogy)
Guillermo del Toro likes monsters. In films like Cronos, Blade II, Hellboy, and Pan's Labyrinth, del Toro has created a smorgasbord of fantastical and scary creatures. Who can forget the chilling Pale Man in Pan's Labyrinth?

And del Toro's entire career pays homage to classic horror stories while updating them with impressive CGI and other contemporary touches. Mimic is an old-fashioned monster movie remade with current sci-fi tropes and digital effects. The Devil's Backbone is a classically-structured ghost story set during the Spanish Civil War.

So I guess it should surprise no one that del Toro's first book would be a vampire novel. Nor should it shock anyone that del Toro would team up with another writer. Movie-making is perhaps the most collaborative craft there is, so it's only natural that an accomplished auteur like del Toro should call upon a veteran scribe of thrillers to help.

Those who speculate on the relative contributions that Chuck Hogan or del Toro himself made to the finished book miss the point. Such speculations always strike me as naive preconceptions about artistic creation. The important question is this: Is the final product worth your time and money to read?

I say it is. That is, if you're looking for a rollicking entertainment full of twists and scares and genuine ickiness,  then The Strain is definitely worth it.

Beginning with a folkloric frame tale, The Strain then moves to a bravura set piece that consciously recalls Bram Stoker's novel. Instead of a Russian ship running aground, in The Strain, we have an airliner landing at JFK airport. Soon after it lands, as it taxis from the runway, the plane goes completely dark. It soon becomes apparent that this plane is a harbinger of doom.

In interviews (such as this one), del Toro has said, without specifically mentioning the Twilight series, that part of the impetus behind The Strain was to return vampires to the status of scary monsters. I'm paraphrasing, but del Toro didn't want to create another story filled with "romantic, languid young men biting the necks of pretty girls." Instead, in The Strain, del Toro has consciously created horrible, sickening creatures that are truly inhuman.

These aren't pale, brooding hunks with fangs. In fact, the vampires in The Strain don't have fangs at all. What they do have is far more disturbing.

Besides this desire to write a scary vampire story rather than a romantic one, del Toro and Hogan have also worked hard to build a strong historical and scientific framework for their story. For most writers of such fiction, such an impulse is a trap, and I've read far too many books where the need of the author to explain their creation has bogged the story down, so that you feel like you're reading a textbook, not an entertainment.

Whatever the logical underpinnings of your story, I want to scream, "Get on with it!" After all, it's a story, not a seminar.

But the authors of The Strain have seamlessly woven their imaginative scaffoldings into the main structure of the story itself. That is, any exposition in The Strain serves to move the story forward. There's no window-dressing for the sake of window-dressing. And I think the scariest stories are the ones that flirt with plausibility, are they not? It's the ones that rub your nose in it that end up boring me to tears.

In short order, as it becomes apparent in The Strain that what landed at JFK is a vampiric threat that could engulf the entire world, a rag-tag team of hunters forms. There's an epidemiologist from the CDC (two, actually), an elderly pawn-shop broker with a surprising past, and a practically-minded pest exterminator. The plot ranges all over (even harkening back to the Holocaust and World War II), jumping from one character to another in scenes that I can only describe as cinematic, and I have to applaud the sheer Dickensian, wide-angle exuberance of the story.

As I've mentioned in previous reviews, I hate to give away too detail, especially when the story relies as much on plot as The Strain does. This is why I'm not revealing anything you can't learn from the book's dust jacket.

Suffice it to say that the action builds to a climax, appropriately enough, and the story leaves just enough unresolved to make a reader hungry for more. Which is good, because The Strain is projected to be the first installment of a trilogy, though it also works well as a stand-alone entertainment.

I, for one, plan on reading -- and enjoying -- the entire trilogy.