Rush - Beyond the Lighted Stage 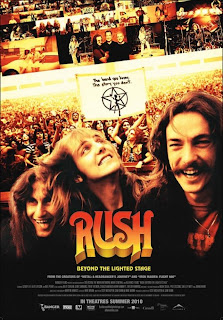 Rush - Beyond the Lighted Stage [2 DVD]
Last night, I resurrected my long-suppressed inner fanboy by watching Rush - Beyond the Lighted Stage, a documentary about the Canadian power trio that, more than any other band, informed the sensibilities of my teenage years.
It was 107 minutes of pure, unadulterated musical nostalgia, and, at one point, I actually got a little misty-eyed.
Let me explain.
Rush - Beyond the Lighted Stage is a rather straightforward portrayal of how Geddy Lee, Alex Lifeson, and Neil Peart came together to form one of the most enduring acts in rock-and-roll. It includes a lot of biographical stuff, as well as heartfelt testimonials from celebrities including Jack Black, Trent Reznor, Billy Corgan, and the television journalist John Roberts. (Those Canadians are like a guild -- always sticking up for each other!)

My own Rush testimonial would go something like this: "I got introduced to their music with the release of the Permanent Waves album, and I soon became an ardent, adolescent convert to their brand of brainy, hard-edged progressive rock. My worship of their music continued through the now-classic Moving Pictures album all the way to Presto, where I kind of fell off the Rush bandwagon until their 2007 release, Snakes & Arrows, when I happily jumped back aboard."
The documentary also includes interviews with the bandmates themselves (as well as the mothers of Geddy and Alex), and the trio reveal themselves to be nerdy, likable, down-to-earth chaps whose dedication to their own brand of what Kirk Hammett of Metallica calls "conceptual metal" comes off as an immature willfulness that evolved into a kind of artistic heroism.
Of course, calling Rush heroic strikes me as a bit of fanboy hyperbole. After all, these guys didn't cure cancer or bring peace to the middle east. But their sort of cool-headed steadfastness really does resonate as a kind of urbane heroism. I got the feeling that these guys would have continued making their kind of music even if they hadn't become the kind of multi-platinum rock gods who still sell out arenas around the world.
One of the documentary's funniest moments comes when Gene Simmons recalls the days when KISS and Rush toured together, and Gene becomes baffled by how nerdy and introverted Geddy, Alex, and Neil were in the face of an onrushing flood of groupies. Still, Geddy follows up with some very nice things to say about touring with Simmons and his cohorts in KISS. "There was no band more determined to put on a spectacular show and give people their money's worth," Geddy says. "They were very good to us."
What do you expect from someone brought up to mind his manners and who spent eleven-months-and-a-day actively mourning the death of his father?
Rush - Beyond the Lighted Stage also takes note of widespread criticism about the band, quoting some blistering reviews that focus on their overly-ornate compositions, head-scratching lyrics, and Geddy's high-pitched, piercing vocals. It also highlights such fodder as the band's nearly "100% male" fan base and their decidedly wretched fashion sense.
Again, what saves the day (and keeps this documentary from becoming a boring hagiography) is the bandmates' understated steadfastness. These aren't the kind of rock-and-roll icons who smashed up hotel rooms and descended into career-wrecking addictions. These are obsessed nerds who became hard-working craftsmen.
So, this is the story of how two childhood buddies with fascinating family histories (Alex & Geddy) hooked up with a bookish drummer named Neil (after their original bandmate had to be let go for his health), and, through endless touring and perserverance, made musical history. It's a rags-to-riches biography that's tailor-made for rock nerds.
The revelation in this documentary is Alex, who comes off as kind of goofy and approachable and big-hearted, although there is a hint of a chink in his amiable countenance when the band recalls their "keyboard period" (from Power Windows to Roll the Bones).
A particularly poignant moment with Alex comes from footage of his teenage self sitting at the dinner table and arguing with his parents about staying in school. It's such a perfect slice of modern family melodrama, and it helps illustrate how normal these guys were. Whatever innate talent these boys possessed was honed in the forges of true dedication and perserverance. (Geez, I've been listening to a lot of Peart's lyrics lately!)
But the real pathos of the story comes from Neil, who, in the course of 10 months from 1997 to 1998, lost both his daughter and his wife. The grief, and Neil's particular way of coping with it (he hit the road on his motorcycle, drove thousands of solo miles, and then wrote a book about it), nearly ended the band. How these three bandmates dealt with this catastrophe, in their own civilized and generous way, is what brought the tears to my eyes. Watching these three men react with such grace is truly inspiring.
Other aging rock acts look a little ridiculous as they continue to perform. The wizened Eddie Van Halen comes to mind, still jumping around shirtless & barefoot on arena stages, even as arthritis bends his frame and swells his knuckles. But Rush doesn't look ridiculous at all, since their music was never really about posturing and partying. Perhaps it helps that the inimitable Geddy Lee has always looked old. So, now that his age is catching up with his distinctive countenance, Rush seems as fresh as ever.
Plus, these guys can totally rock.
Rush - Beyond the Lighted Stage
directed by Sam Dunn and Scot McFadyen
starring Geddy Lee, Alex Lifeson & Neil Peart as themselves
jjwylie@gmail.com
www.jjwylie.com
Posted by JJ Wylie at 11:57 AM