(This is my branch of the Las Vegas-Clark County Library District)
I am a power-user of my local public libraries, and I have to recommend them to anyone trying to plug into local culture.

Now, I'm not just talking about books, although that really is the main draw. Besides the other on-shelf offerings (like movies & music), my libraries host events and have large bulletin boards advertising things you just don't see anywhere else, like weird concerts (such as the "Nevada Old-Time Fiddlers Jam"), lectures & readings, and all manner of support groups. They show films, host blood drives & talent competitions, prayer groups & game parties. There are computer classes & writers' workshops, book club meetings & theatrical performances. And almost all of them are free.

I often see these gatherings in progress as I walk past the rooms where they're held, and, no matter what's going on in there, whether it's a bunch of senior veterans swapping war stories or a showing of a foreign movie or a costumed storyteller entertaining a bunch of kids, it never fails to warm my heart. It's a popular trope to demean the culture of Las Vegas, but I can tell you it's alive and well in our libraries. 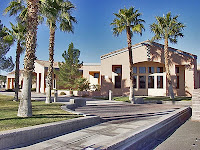 (This is my branch of the Henderson Libraries)
I'm a cardholder in two local library districts, the Las Vegas-Clark County Library District and the Henderson Libraries, since I live just a couple of blocks from the dividing line that separates Sin City from its biggest suburb. And I remember the salad days when you could return books from one district at the branches of the other, but cost-cutting has ended that particular luxury.

Still, my libraries have much to offer. I've already mentioned a bunch of stuff so far. And with the ability to access the libraries' catalogs via the internet, I can actually reserve books or movies or CDs, wait for the email telling me they're in, and then go pick them up at my convenience.

But that's not all.

Going to the library and browsing is, for me, immensely comforting. All that accumulated knowledge and experience is just waiting for me to take a little bit off a shelf and add it to my imagination. It's like window-shopping for my brain.

And my libraries put me in touch with broad sections of local citizenry that I would not normally have any contact with. That random assortment of groups using the meeting rooms is only one way I get to look in on an otherwise-alien strata of the local populace.

First, there are the people wandering the aisles. I don't know what it is about me, but when I'm outside the house, I often get stopped by people asking for help or directions. I like to think it's my friendly face, but it's probably my own state-employee fashion sense. In stores, it seems customers assume I work there, never mind that I'm not wearing a name tag.

At the library, I get asked where stuff is all the time. Sometimes, these questions come in a language I don't speak, as people make the assumption that my brown skin means I'm at least bilingual. I always try to answer such questions or at least point the questioner towards someone who can. And I'm not just tooting my own helpful horn. The communal atmosphere of the place makes everyone act polite and friendly, which is how the whole world should be, if you think about it.

Unlike other spaces in this city, which are essentially mercantile in nature, our libraries are concrete expressions of communal spirit. They do not exist to create a profit margin, and, with their emphasis on the open exchange of expression and knowledge, they're a vital means by which those without access to more commercial methods of betterment can bootstrap themselves to individual fulfillment.

Proof of this can be found by visiting the computer labs of any branch of our public libraries, where any citizen can sign up for some valuable workstation time. These places are almost always packed to capacity with people seeking both education and employment. And the underpaid librarians who staff these rooms act as guardians, custodians, technicians, teachers, and counselors to the hordes of the hopeful, and these public servants invariably do so with unending reservoirs of politeness and generosity.

True story: I saw a middle-aged woman with her teenage son walk up to the librarian and ask how to use the computers. The woman had apparently signed up for some workstation time, and now it was her turn. When the librarian asked her what she needed help with, the woman replied by pointing to the teenager with her and saying, "My son needs email!"

While I struggled to place her accent, the librarian responded by asking, "Well, does your son have an email account?"

The woman and her son looked at each other. Their obvious confusion said volumes, and I expected the librarian to refer them to one of the many introductory computer classes that are always being held. But she didn't. Instead, her voice suddenly changed, taking on even more welcoming overtones of warmth, and she enthusiastically said, "Well, let's get you all set up, okay? Come on, this is going to be fun!"

I watched from where I was sitting with my laptop as the librarian led this woman and her son to a workstation and proceeded to get the boy signed up for an email account via Yahoo. She patiently explained every step in the process, and the woman made her son write everything down in a notebook. The woman hung on this librarian's every utterance as if it were gospel.

When the librarian asked if the boy had ever used email before, he nodded and said he knew the email address of his uncle, and the librarian encouraged the boy to send his uncle a message. The boy looked at his mother. She nodded, and he typed a quick sentence and sent it. Then the librarian moved on to discuss how to surf the internet.

However, after a minute or two, the librarian pointed to the screen and said, "Look, your uncle replied to your message!"

The boy and his mother stared at the screen. They both read the screen for a minute, and then the woman put her arm around the boy's shoulders and they shared a long, silent hug. The librarian politely looked away, but there were tears in her eyes and I knew she had read the screen, as well.

Whatever it was that the uncle had written, it clearly made the woman and her son very happy. I refuse to speculate on what it could have been. I just know this: that librarian is doing blessed work in a blessed place, and I am proud of a community that can make such things happen.