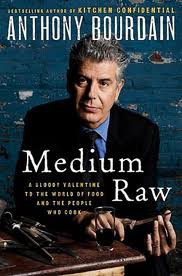 Medium Raw: A Bloody Valentine to the World of Food and the People Who Cook
by Anthony Bourdain
An almanac entry of Anthony Bourdain would read like this: He's a chef-turned-TV-host who travels the world, sampling cultures and cuisines while narrating his adventures in a sarcastic-yet-self-effacing way. His first television series was "A Cook's Tour," which ran for two seasons on the Food Network, and his current series is "No Reservations," which is currently in its sixth season on the Travel Channel.

The book that made him famous enough to become a TV personality was Kitchen Confidential, a memoir of his career as a working cook, which itself was an expansion of an article he wrote for the New Yorker entitled, "Don't Eat Before Reading This." These titles would rightly lead you to believe that Bourdain is a contrarian, out to expose the hidden truths behind the glittering facades of our most acclaimed culinary palaces and preconceptions. And you'd be right.

I don't say this in order to characterize Bourdain as solipsistic or narcissistic or otherwise hung up on himself. (Unlike, say, the younger Woody Allen, Bourdain is actively engaged with the world outside his own thoughts and feelings.) I say this in order to accurately describe what it is that makes Bourdain worth reading (and watching).

Yes, he focuses on cuisine, but his subject is his own reaction to it and everything else. He's a commentator more than a practitioner. In other words, he's a critic. And, in Medium Raw: A Bloody Valentine to the World of Food and the People Who Cook, Bourdain focuses his critical eye on a variety of things, including himself. Truth be told, Bourdain is a very harsh critic of Anthony Bourdain.

I just want to make the argument that, had Bourdain entitled that first book "Auto Garage Confidential" instead, it would probably still have made him famous.

Remember that Kitchen Confidential was, first and foremost, a memoir. So is Medium Raw. And the decade between the two books has given Bourdain lots of fodder.

First, Bourdain is no longer a working cook. Second, he is now rich and famous and, inevitably, older. Third, he has seen how the culinary landscape of America has changed, and he has some strong opinions about it. And, finally, he addresses some lingering issues from Kitchen Confidential. (For those of you who read that first book, he wants you to know that it's okay to order the fish on Mondays.)

There's your nutshell. But it doesn't do justice to what makes this book work.

See, what animates Bourdain is his relentless quest to distinguish (and I shall paraphrase here) bullshit from quality. And he is refreshingly egalitarian in this pursuit. Whether the subject is the dissolution of his first marriage or the pettiness of the critic Alan Richman (with whom Bourdain has had an ongoing feud), he is as quick to point out his own failings as he is to skewer the pretensions and hypocrisies of others.

He is both merciless and complimentary to the iconic Alice Waters, just as he is to Wolfgang Puck and Rachel Ray, and, more than once, he admits that his own abilities as a chef were always limited and are now nearly faded. He defends the too-cute Jamie Oliver (for the man's heroism, no less) even as he admits that just about the only thing separating Bourdain from the Food Network shills he despises (like Guy Fieri) is mere "vanity."

Apparently, the only reason there isn't a Bourdain line of cookware is that no one has made him the right offer yet. And his admission of what he is willing to do to get Oprah to endorse his book is hilarious. What could be more winning than a serious critic who doesn't take himself too seriously?

Medium Raw ranges far and wide, giving us snapshots of Bourdain's favorite dishes from across the globe (he is a particular fan of street food, although the book opens with one of the most decadent scenes of haute-cuisine I've ever experienced), and he updates us on what he feels are important culinary trends, such as the growing food-truck movement in Los Angeles or the criminal proliferation of the "Kobe-beef" burger. All of this is seasoned with Bourdain's trademark foul-mouthed witticisms.

Bourdain's language is a great deal saltier than the writings of, say, Mark Bittman or the venerated M.F.K Fisher. But I'm a sucker for profanity. (And Bittman gets a little Bourdain-inflected hyperbole directed his way, as well.)

For me, the real draw of this book (and all of Bourdain's work) is the seemingly-transparent way he narrates his experiences. There's a visceral rawness to both his experiences (the food and the sights) and his thoughts. In other words, Bourdain lets us in on the process of his reasoning. Sure, he has strong opinions (many of which I agree with, such as his absolute intolerance for people who are rude to service staff), but he is also singularly willing to re-examine those opinions in the light of new experience.

In his TV shows, he often reacts to something (a dish or a cultural expression) only to reverse himself and then spend several eloquent minutes examining the pretension that caused his initial surprise. I think it's endlessly entertaining to watch someone authentically double-back on their own preconceptions, and Bourdain does it constantly. In Medium Raw, for instance, Bourdain contorts himself mightily on the subject of Alice Waters, first castigating her political stances and then acknowledging her perserverance and charm. It's a bravura bit of rhetorical acrobatics. Bourdain doesn't so much reverse himself as simultaneously inhabit both sides of the issue at once.

The poet Keats called it "negative capability," this ability to hold two competing and antithetical positions at once, and Bourdain is always saying some form of "This shouldn't work...but it does!" as he samples something he initially finds repellant, as when he spoons ketchup on his ceviche in South America. In my experience, people with this capacity for "negative capability" are usually the smartest, funniest people in the room.

Lest you begin to think that Medium Raw is a mere catalog of Bourdain's own reactions, I must point out the chapters that deal with other subjects, such as the memorable portrait of the volatile David Chang, proprietor of the currently white-hot Momofuku restaurants -- or the masterpiece of a chapter dealing with Justo Thomas, the man who prepares the fish at Le Bernardin. Anthony Bourdain may be all about Anthony Bourdain, but his chapter on Justo Thomas proves he knows when to step out of the spotlight because the richness (and raw humanity) of the subject demands it. Talk about a working-class hero.

In the end, I zipped right through Medium Raw, and then I browsed through some criticism about it. Bourdain, it must be said, has his detractors. But, to a man (or woman), they seem to have succumbed to the idea that Bourdain should have re-written Kitchen Confidential. But Bourdain seems too honest (and too engaged with the current moment) to do that. Sure, in Medium Raw, he buries some hatchets raised in that previous book. But times have changed, and so has Bourdain.

The other major criticism of Medium Raw seems to be that Bourdain somehow lacks the requisite bonafides to write such a book. This type of criticism is elitist and disingenuous.

First, Bourdain has laid his qualifications right out in the open for all to see. He may not be a chef on par with Thomas Keller (and who is?), but he is still a former working professional with years of experience who graduated from the Culinary Institute of America. Second, the very idea that only certain people should write certain books is patently ridiculous. It's the critical equivalent of attacking the man instead of his argument, and, on principle alone, I have to reject it. (Not to mention it's denial of the power of imagination!)

Quibble if you will with Bourdain's positions on foie gras or tasting menus, but don't reject his right to express them.

I, for one, hope Bourdain keeps expressing himself for many years to come. Read this book, and I bet you'll agree with me.


Medium Raw: A Bloody Valentine to the World of Food and the People Who Cook
by Anthony Bourdain


(Note: I have entered Anthony Bourdain's Medium Raw "Why Cook Well?" Essay Contest. My entry can be found here.)
jjwylie@gmail.com
www.jjwylie.com
Posted by JJ Wylie at 1:26 AM