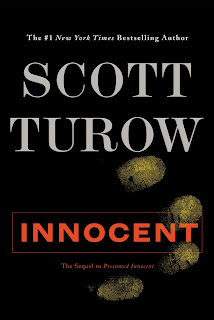 Innocent by Scott Turow
The latest book by novelist-lawyer Scott Turow is a sequel to his first bestseller, Presumed Innocent. I came to that first story via the movie adaptation that starred Harrison Ford and was directed by Alan J. Pakula. After being wowed by the movie, I went back and read the novel. And I enjoyed it, too.

But for my money, Turow's best book is Ultimate Punishment, his meditation on the death penalty based on his experiences as both a prosecutor and as a defense attorney who actually argued such cases (and as a member of an appointed commission investigating its administration in the state of Illinois).
That's the book on Turow: he makes the truth into a provocative entertainment. He is a capable stylist, but his true gift is his command of realistic detail and emotional consequence, ostensibly coming from his actual experience as a working attorney. I don't know him, and I'm no lawyer. But no one else I've read can take a pile of prosaic legal detail and turn it into a true-to-life thriller like Turow.

Others may rely on fireworks and more dramatic implausabilities, but there's something solid and reassuring about Turow's entertainments. They're sturdy, and they hold up to close scrutiny. Even his most improbable coincidences strike you as absolutely realistic. He's not the most economical of writers, but he's one of those knowing storytellers whose wisdom informs every sentence, so that you feel like what you're getting is gospel.

Innocent is no different. And that's saying something, because this book carries the burden of being the follow-up to the book that made Turow a household name. Some two decades after the events of Presumed Innocent, the character of Rusty Sabich has progressed from prosecutor to judge, but he finds himself embroiled once again in the mysterious death of a woman close to him. The resulting drama includes some wonderful courtroom scenes, which is a hallmark of Turow's fiction. Though Turow has his antecedents, he basically built the house Grisham is living in.

Like all the best thrillers, the plot of Innocent twists in ways that, in retrospect, make perfect sense, from the groundwork Turow has expertly laid in place. It's a plot that turns in upon itself, almost incestuously, fueled by the motivations of Turow's characters. Love gets mentioned a lot by the people in Innocent, and its many forms are what fuel them. In fact, the real villain of the piece even mentions love when finally confronted by the truest do-gooder in the cast.

Sabich, now in his sixties, is the focus of the story, but he is not the book's most interesting character. For me, it is Tommy Molto, Sabich's professional rival and a kind of shadowy alter-ego, who ends up stealing the stage. Their antagonism reaches back to the events of Presumed Innocent, but the intervening years have changed Molto in ways that don't become apparent until very late in the story, giving him a richness that stands in marked counterpoint to Sabich's own darker developments.

Less successful are the book's other narrators, particularly Rusty's son, Nat, whose clunky use of slang (at one point, he says 'blasted' when he means 'wiped') is especially noticeable, but this is quibbling. As readers, we are in the hands of a master craftsman, enjoying the milieu he creates in the first half of the book and then hanging on with both hands as the action really cranks up in the second half.

Though Innocent is indeed an entertainment, with all the deliberate pacing of a well-made thriller, Turow is an inveterate humanist, imbuing each of his cast members with at least a little tinge of fullness. We learn the dynamics of the Sabitch marriage, as well as what it means to be raised in such an environment. We learn what it means to be on the wrong side of a famous court case, including how it affects the interpersonal dynamics of one's professional cohorts. We even learn the family dynamics of the brilliant, terminally-ill defense attorney who once again takes his place at Rusty's side at the defendant's table.

Even the judge who presides over the murder trial that makes up Innocent's back half gets his requisite backstory and moments in the spotlight, and Turow also takes the time to explain the judge's accent, which would come off as criminally stereotypical if the author hadn't already taken such care to fill this character out. It's this kind of craftsmanship that elevates Turow's work into true literary art.

Finally, Turow has a fine and nuanced understanding of the difference between what is legal and what is just. It is his realistic handling of this difference, which can result in the kind of paradoxes that make lesser minds think our criminal justice system is worse than it really is, that gives the ending of Innocent a real wallop. I hate giving away too much of a book's story while reviewing it, but suffice it to say that the last few chapters will have you shaking your head.

It's getting a little late in the season to recommend a beach read. But if you're looking for some true-to-life entertainment, I have to recommend Scott Turow's Innocent.


Innocent
by Scott Turow
the sequel to the novel Presumed Innocent
jjwylie@gmail.com
www.jjwylie.com
Posted by JJ Wylie at 9:56 PM