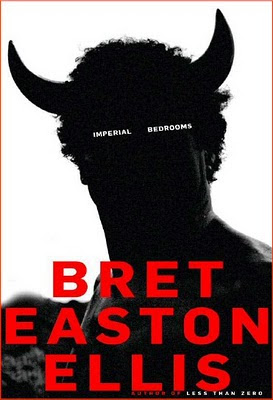 Imperial Bedrooms by Bret Easton Ellis
When Less Than Zero came out 25 years ago, I devoured it. I was a high-school senior, and this book hit me hard, focusing all my own aspirations and confusions into a cohesive, if limited, aesthetic. Everyone at that age needs something to tell them what's cool, and this book did it: the tone, the subject matter, the setting and all its pop-culture trappings. This book was, for me, what Catcher In The Rye was for earlier generations. I am unashamed to admit it.

When the movie adaptation of Less Than Zero came out a year or so later, I was beyond disappointed. I enjoyed the movie, to be sure, for I am of that original MTV generation so taken with the melding of fashion and music and cinematic effects that we cared little for the results. But, the movie, pretty as it was, just wasn't the book. Where the book was about the dangers of surface, the movie was nothing but.

So now, a quarter century later, Imperial Bedrooms comes out as a sequel to Less Than Zero. All the major characters have reassembled: Clay, Blair, Julian, Rip, and Trent. Once again, it's Christmastime in Los Angeles, that weird period where the gap between our seasonal expectations and the stark realities of our surroundings is at its most glaring. It's winter, but in Hollywood, any powdery white stuff is either fake or illegal.

Imperial Bedrooms begins audaciously enough, with an outright acknowledgement of both the first book and the movie in a way that sets the metafictional antennae waving. So the Clay in Imperial Bedrooms isn't the Clay in Less Than Zero, but is that because at least one of them is fiction? Or is it more because of the intervening years, as none of us is who were two decades ago? Or (whisper, whisper) is NEITHER of them real?

Author Bret Easton Ellis expertly plays along this line, managing some excellent riffs on the movie business, until, on page nine, he drops his first whopper (spoiler alert!), addressing an important difference between the original book, the movie, and what will pass for reality in Imperial Bedrooms:


"The real Julian Wells didn't die in a cherry-red convertible, overdosing on a highway in Joshua Tree while a choir soared over the sound track. The real Julian Wells was murdered over twenty years later, his body dumped behind an abandoned apartment building in Los Feliz after he had been tortured to death at another location."

So this, as they say, is when the shit gets real. Except that it doesn't. Not really. Ellis, as in his first book, is very interested in the difference between surface and reality, so he plays his cards very close to his chest. All of his books, to a large extent, are circumspect about what really happens in them, and Imperial Bedrooms is no exception. (This is what, presumably, forgives the gory and violent excesses of American Psycho, giving us both our prurient fun and allowing us to keep it at arm's length.) Any information that characters or readers can glean about what's happening in Ellis's books has to be treated with very generous seasonings of salt.

Yes, a plot of sorts soon develops in Imperial Bedrooms, a kind of meandering, noirish plot that envelops the book in unfocused but pervasive dread as Clay, our narrator, navigates both the city and his own urges, seeking something that soon sort of finds a focus in the form of (you guessed it) a girl. Sort of.

I don't really have a problem with this. In fact, I enjoy playing along, reveling in Ellis's virtuosic displays of a very limited tonal vocabulary. (He's the kind of author who must have seen the advent of texting as a godsend.) Unlike others, who see Ellis as a kind of one-note, artistic charlatan, I see him as a kind of savant, working within a very strictly-confined set of notes, a world in which characters operate out of a terror, not of betrayal, but of revelation. They would rather be fucked over than found out, which is why the unveiling of Julian's latest business venture is so perfect.

The Clay in Less Than Zero was emotionally castrated and ineffective, but I could forgive him because he was young and overwhelmed. But the Clay in Imperial Bedrooms is a much more sinister creature. He's older and jaded, of course, but his age and competencies have apparently yielded no wisdom, which, again, really isn't a problem for me, except that, in the absence of learning or making something transcendant as one endures to middle age, I find it hard to sympathize with someone who can't even cope.

Except, again, Clay does, in the end, cope -- rather typically so, and in a way that carries a truckload of implication. I won't give it away here, but suffice it to say that, true to his aesthetic, Ellis makes Clay commit himself by NOT doing something. As I mentioned before, Ellis really is a kind of virtuoso.

"All plots tend to move deathward," wrote Don Delillo in White Noise, and Clay seems to know this without wanting to express it. This knowledge is what informs his rather clumsy dreams. So his non-act, after pages of compulsive dithering punctuated with prodding text messages and the allusive accusations from what passes for his friends, comes as something of a relief. I thought it was perfectly in keeping with what Ellis has wrought, and I admire such steadfastness in an author, although I can see why many would just shake their heads and close the book.

But I enjoyed Imperial Bedrooms. It's a dark and bumpy ride, sure, but it's blissfully short. I see Ellis as continuing in the tradition of Nathanael West and Raymond Chandler and Joan Didion, writers who beautifully rendered the rotted fruit that is Los Angeles. And this book cleansed me of any nostalgia for that boy who was so taken in by Less Than Zero that he aspired to emulate it. Question is: what on earth will Bret Easton Ellis do next?