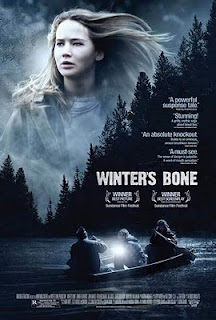 Winter's Bone
In a fairer world, Daniel Woodrell would be a household name. His books are as entertaining as any bestseller, and he is a lyrical and powerful writer of the first order. He doesn't just create characters; he portrays people, using language that will turn your head.

And, the truth is, he just keeps getting better. He is the author of eight novels now, and, since the publication of Give Us A Kiss in 1996, I've had the same reaction every time I've read his latest book: I always think, "This one's his best."

Woodrell's eighth novel, Winter's Bone, came out in 2006, and I loved it, just as I loved The Death of Sweet Mister, Woodrell's previous work. Now, with the release of a movie adaptation that's won prizes at Sundance, I've taken the opportunity to revisit Winter's Bone, and I am happy to declare that it holds up.

The book opens with a great line: "Ree Dolly stood at break of day on her cold front steps and smelled coming flurries and saw meat. Meat hung from trees across the creek."

Winter's Bone then follows the trials of sixteen year-old Ree Dolly, an inhabitant of a corner of the Missouri Ozarks that seems mired in another time. Except that it isn't.

While ancient clan ties still determine much of life in Ree's part of the world, the very contemporary scourge of methamphetamines also plays a major role in the local illicit economy. See, Ree's father is a "half-famous" cooker of meth, and he's just skipped bail, so Ree needs to find him before she and her family (two young brothers and an addled mother who's "lost to the present") lose the house that he's put up as collateral.

Thus begins Ree's quest. It's a self-appointed mission that pits her against members of her own clan, but Ree is tough and resourceful, though enlightenment always has its costs. It's a hard-boiled sort of plot, tight and mean, but Woodrell manages to wring some poetry out of it, as in this description of the boys:


"Sonny and Harold were eighteen months apart in age. They nearly always went about shoulder to shoulder, running side by side and turning this way or veering that way at the same sudden instant, without a word, moving about in a spooky, instinctive tandem, like scampering quotation marks."

Ree is fiercely protective of her family, coaching her brothers with tough love and teaching them how to cook and shoot and fight, even as she herself longs to join the Army in order to get the hell out of this inbred and dangerous valley. But, as they say, life is what happens while you make other plans, and Ree's life soon takes some dramatic turns as she works to find her father and secure the roof over her head.

Winter's Bone is a short, pungent work that nevertheless packs more character and context into its plot than most novels twice its length. Like all great works of art, there's something primal and basic at play in Winter's Bone, something that applies to all of us.

And I haven't even mentioned Woodrell's dialog, which is wonderful in its mix of local accent, dark humor, and psychological insight. His characters live and breathe, and they come alive on the page. It's a testament to Woodrell's skill that he does all of this in less than two-hundred pages.

The book ends with the same musical prose with which it begins: "Fading light buttered the ridges until shadows licked them clean and they were lost to fresh nightfall." But along the way, we've enjoyed quite a story, and we've gotten to know some people whose lives burn as brightly as our actual neighbors, evoking our sympathies (and our antipathies) in much the same way.

I can only hope that the movie adaptation of Winter's Bone lives up to its initial buzz and that it shines a brighter light on the work of Daniel Woodrell. His books deserve it.


Winter's Bone
by Daniel Woodrell
jjwylie@gmail.com
www.jjwylie.com
Posted by JJ Wylie at 8:10 AM