It's been a very lean year for Brother Juan and me, but we both got some good news recently. So, we decided to celebrate at our favorite neighborhood eatery, Todd's Unique Dining.

Located on Sunset Road just a few blocks from where we live in Henderson, Todd's Unique Dining is an oasis of excellence in the desert of chain-restaurant mediocrity at this end of the Las Vegas valley. They specialize in steak and seafood, with an ever-changing menu that focuses on seasonal freshness and strong technique to create some really wonderful dishes.

We sat at the bar, where we've always received superb service. The staff is friendly and attentive, with a thorough knowledge of their menu and drink selections.

Since we hadn't been there in a while, and since Brother Juan is on a first-name basis with the entire crew, we were treated to a free round of drinks as a welcome back. While Brother Juan stuck to his usual Gentleman Jack-and-coke, the Princess opted for a Cherry Cosmo that had just the right amount of sweetness without turning this classic concoction into a sickening confection. I chose a Miller's gin-and-tonic on the bartender's recommendation. It turned out to be the perfect refreshment: not too tart, not too syrupy, and the squeezed lime added a nice note of citrus.

The decor at Todd's Unique Dining is simple, straightforward, and elegant. I wouldn't call it bland, because every detail speaks of craftsmanship, but it doesn't draw attention to itself. Nor does it detract from the overall experience. Like everything at Todd's Unique Dining, it strikes a perfect balance on the palate.

But it is pretty dark in there at dinnertime, which is why our Iphone-generated pictures didn't turn out very well. 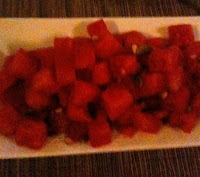 The Princess's watermelon salad was a nice starter. Small cubes of watermelon are mixed with spicy cooked pumpkin seeds, lime juice, and paprika, and feta cheese is crumbled into it, making for a sweet, tantalizing summer salad.

Along with my gin-and-tonic and the yummy selection of breads, the watermelon salad had pretty much satisfied my hunger.

Then our entrees arrived. 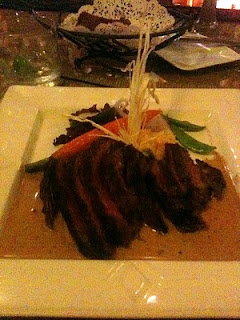 Brother Juan and I each ordered the night's special, which was a Guadalajara Hanger Steak, served medium rare. Marinated with a tangy blend of spices and grilled with a deft touch that created a crunchy, flavorful crust while keeping the center of the steak moist and juicy with just the right amount of chewiness, this steak was beefy perfection.
It was accompanied by a generous helping of polenta that had been seasoned with green onions and lashings of sriracha that gave the creamy side-dish real bite while still allowing it to fulfill its function as a sop for those precious drippings from the steak. 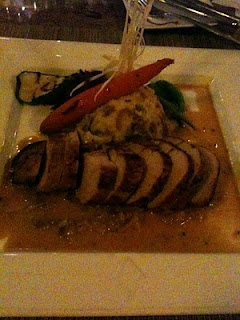 The Princess chose an old favorite of hers: Todd's pork tenderloin with granny smith apple glaze. It's an elegant version of one of the Princess's favorite comfort foods, with the moist pork seasoned very nicely and the glaze adding a nice note of tart sweetness. Her mashed potatoes came laced with caramelized onions, adding another layer of sweetness, though this was leavened somewhat by the tang of the onion. A lesser chef could have cooked those onions to near tastelessness or left them too raw and biting, but, as you've probably gathered, Todd knows what he's doing.

We were stuffed and happy by this point in the evening. Being lightweights, the Princess and I had nursed our drinks along, but Brother Juan was polishing off his second Gentleman Jack-and-coke and was seriously contemplating a third, when our bartender suggested a dessert.

At the mention of apple cobbler, the Princess nearly burst into tears. Her entree had already filled her with blissful nostalgia, but the night's featured dessert threatened to awaken some full-blown homesickness in her. Needless to say, we decided to share an order. 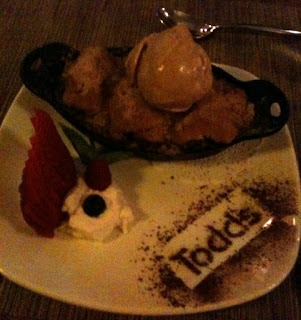 The cobbler was, of course, delicious with a thick, brown-sugar crust that quickly quieted my normally-raging sweet tooth. But the real coup de grace of this dish was the scoop of homemade cinnamon gelato that topped it. It was very nearly too much, but we couldn't resist. We descended on it like we hadn't eaten all day. Even our normally-unflappable bartender was a little taken aback by the frenzy with which we attacked it with our spoons.

Ever the gracious companion, Brother Juan picked up the check, and we staggered from Todd's Unique Dining, thankful that we only had a few blocks to go before we could collapse on our couches in a delerium of complete satisfaction.

We'll be going back to Todd's Unique Dining. Soon.