My Night At The Fights

Thanks to my good friend, Dr. Jay (who, among other things, works for the Nevada Athletic Commission), I attended last night's Top Rank boxing ticket at the Hard Rock Hotel & Casino.

Although the event didn't have the star-power of the Holyfield-Botha fight taking place at the Thomas & Mack Center, it still provided a ton of entertainment, mainly because I spent the evening being a fish-out-of-water.

An account of the night's bouts can be found here in an article from Fightnews.com. I include this link because I am not a knowledgeable boxing fan. But I now have a much better appreciation of the sport, having seen it up close in 8 bouts of wildly varying quality.

I arrived early, as instructed, and got to watch as the set-up for things got finalized. Dr. Jay explained to me his role as one of the fight doctors, which was to give each boxer a post-bout checkup to determine whether or not they needed further medical care. 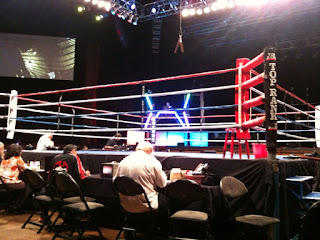 This was the view from my original seat, and I watched the first 6 bouts from here. Before the fights, I got to meet the promoter and Top Rank CEO Bob Arum, who was going down the line glad-handing everyone. I'm sure he was mystified as to why a nobody like me was sitting there at the end of a row of people with juice. (Do you think he would have been impressed if I had told him I was going to mention him in my blog?)

Besides that, I got to eavesdrop on such conversations as the security personnel discussing possible troublemakers and the referees commiserating over the difficulties of overseeing a fight between a no-talent "tomato-can" and an up-and-comer who hasn't quite got the skills to close out their opponent efficiently -- which apparently means "every damn bout's gotta go the damn distance."

Also, I overheard the TV cameramen and press photographers complaining about the venue. Apparently, a standard convention hall would have been better-suited to hosting a boxing event than an auditorium constructed as a concert hall. But I never quite figured out exactly why. My guess is that an actual sports arena probably has better-priced concessions.

Once the crowd started filing in, the resident DJ cranked the soundtrack up to nearly-painful, so that, as in a nightclub, people had to yell at each other to carry on a conversation. I know it's supposed to get everyone in the mood, but the volume was beyond annoying. Even the wandering cocktail waitresses had to get right into your face just to take your order. It's a good thing they were cute.

Once the boxing started, I really got into it. The first 2 bouts were okay, but heavyweight boxing is nowhere near as interesting as the lower weight classes. In fact, it's the smaller guys who put on the real show. They're faster, and their technique is sharper. 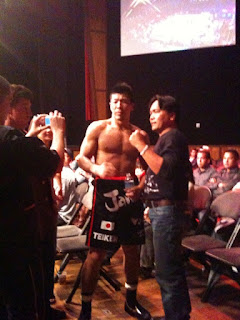 Hiromitsu Miura (above) made his debut as a boxer on this night, apparently after starting his career in MMA. After winning his light heavyweight contest against Isaac "Punching Bag" Atencio, Miura was nice enough to stop for a picture & high-five me on his way out of the arena. (My Iphone camera, which is adequate at best, did not react well to the disco lights & rapid movement during the boxing, which explains my lack of usable photos from this event.)

Local boys Diego Magdaleno & Anthony Lenk acquitted themselves well in front of their hometown supporters, as Lenk scored a couple of knockdowns before the ref called the bout and Magdaleno tattooed his opponent's head and shoulders without getting so much as a mark on himself.

But the main event of the night was Filipino left-hander Mark Melligen's bout with Norberto "Demonio" Gonzalez, who showed a lot of swagger & grit but conceded every round to Melligen's superior quickness & power. In fact, late in the fight, Gonzalez's cheekbone threatened to poke through the growing cut Melligen had given him, but "Demonio" refused to go down, unleashing small, ineffective attacks that only stalled the inevitable. Throughout the contest, Gonzalez seemed to be waiting for that "puncher's chance" that never came. 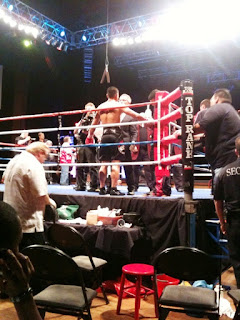 (Melligan awaits the announcement of his victory after the final bell.)
Retired champion Fernando Vargas shook my hand as he left after the main event, but what got the meager crowd really depressed was the exit of the ring card girls, who didn't stick around once the TV cameras were turned off. And who could blame them? Those shorts were riding way too high to be comfortable.

After the Melligen victory, Dr. Jay invited me ringside, as Joe Cortez reffed the last 2 fights. As close as my seat was earlier, sitting right next to the ring was even more enthralling, especially since the other ref (whose name sadly escapes me) sat next to me, giving me a blow-by-blow analysis of the action. (His analysis boiled down to: "If this guy would quit going for head-shots and start working that body, we could all go home early!") The boxing got way more palpable. I could feel each punch, instead of just hearing it, and, occasionally, I got sprayed with sweat (which was, indeed, icky).

Dr. Jay & I capped the evening off with a late meal at the Pink Taco, which has passable fare but whose real draw is all the eye-candy strutting around. In fact, for all its rock-and-roll trappings, eye-candy seems to be the real reason the Hard Rock Hotel & Casino exists at all.