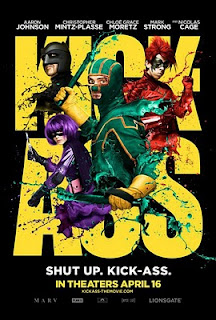 The moral reservations of Roger Ebert aside, I actually enjoyed the movie Kick-Ass. But I come to it with low expectations and a deep appreciation of the genres from which it was born.

After all, the idea of applying realism to action movies or superhero comics is absurd. Realism is best left to documentaries and memoirs, and even most of those can't actually match the lush contexts of the actual world we live in. I once heard the novelist Robert Stone (a die-hard realist if there ever was one) say, "Realism is a poem one writes to the world."

Also, dismissing these genres for being unrealistic is as immature and artistically myopic as getting your entire entertainment diet from them. These genres have their own time-honored conventions and expectations, and one can be just as artistic working with them as with oils on canvas.

So, is Kick-Ass a worthy addition to the already-crowded category of superhero action movies? I think so, but mainly for the ways in which it violates established forms. For instance, the opening scene, which plays exactly as it does in the comic book, vividly illustrates the absurdity of the idea of superheroism itself. It's a start that seems to signal at least an awareness of the strictures of realism, giving those of us who live & breathe an easy entry into this particular world.

Based on the comic book series by Mark Millar, Kick-Ass takes the convention of the teenage crusader and updates it for our internet-enabled times. High-school student Dave Lizewski is the kind of anonymous sad-sack that fills every neighborhood, but he chafes at his circumstances, finally deciding to take matters into his own hands by becoming a masked vigilante. He has no superpower, other than his earnestness, and he puts up a MySpace page and begins answering requests for help, but not before comically & painfully breaking himself in as streetfighter.

So far, so what. Except for the MySpace page, which I guess is the current generation's version of the bat-phone (though Facebook would've been even more trendy), this is run-of-the-mill stuff. But the consequences of Dave's first fight have rather funny ramifications in his personal life & relations. The way this plays out comes off as fresh and interesting, much more so than the typical over-the-top action that forms the climax of the movie. Dave is much more compelling as Dave than he is as Kick-Ass.

In the original comics, the action seems more dramatic & intimate, mainly because it's consciously filtered through Dave himself. Even the revelations behind the character of Red Mist come through Dave's awareness. However, the movie isn't shot from the inside of Dave's head the way the comic seems to be. In the movie, Dave still narrates, but the intimacy -- and thus the emotional connection -- is gone. We go from conscious identifying with Dave to merely watching him.

Another factor hurting the movie is the casting. The use of Nicolas Cage (who, frankly, phoned in his performance) and other recognizable actors such as Mark Strong for supporting roles distances us emotionally from the story. I know this sounds paradoxical, since the job of good actors is to elicit a connection with their audience, and these are really good actors. But, in the comic, all we have to judge Big Daddy on are his actions. Is he crazy for turning his daughter into Hit-Girl or not? In the movie, when I see Mr. Cage playing him, I start wondering when he is going to uncork one of those scene-chewing rants he's famous for. Mr. Cage distracts more than he embodies, and Big Daddy becomes less a character than a role.

The film has other weaknesses, like the aforementioned by-the-numbers action sequences. There are a lot of them, and they're about what you'd expect. But what saves the film is the performance of Chloe Moretz (last seen by me in 500 Days of Summer) who plays Hit-Girl. As funny as it is to hear a little girl spew profanities, Ms. Moretz does an even better job managing to switch between doting daughter and hardened killer without missing a beat. She has real presence, essentially stealing the show. Despite Kick-Ass being the title character, Hit-Girl is the one with superpowers.

The movie also strikes me as too clean and too clear. The artwork of the original comic is gritty & darkly-complected, suggesting a cityscape that begs for young Dave to don his costume. The photography & set design of the movie is, by contrast, almost antiseptic, unmooring the story and putting it on a soundstage. The conventions of genre call for darkness & filth, especially when dealing with themes of violence & vengeance.

Maybe I'm asking too much. After all, I did enjoy the 2 hours it took for me to watch this movie. And, though I'm a little old to be called a fanboy, I also appreciate the ways in which the movie tried to be faithful to the comic book. So I give Kick-Ass the movie a passing grade. I just hope the inevitable sequels do even better.