The movies of Wes Anderson are an acquired taste. Rushmore and The Royal Tenenbaums are all-time personal favorites of mine. But I recognize they're not for everyone. They're full of oddness & a kind of understated, wry humor, and their storylines typically follow a bewildering cast of characters. But I love them and rewatch them all the time. Mr. Anderson, you had me at Bottle Rocket. 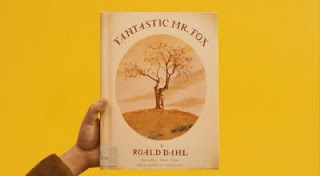 His latest movie is Fantastic Mr. Fox, a very loose adaptation of the book by Roald Dahl, the man who created Charlie and the Chocolate Factory and James and the Giant Peach. Anderson has chosen to animate the story using stop-motion, giving the movie a quaintly classic feel, and he has enlisted an all-star cast of voices, including George Clooney, Meryl Streep, Bill Murray and Jason Schwartzman.

Clooney voices the title character, a fast-talking, chicken-stealing rogue who is forced to settle down when his wife (voiced by Streep) announces that she's pregnant. But the life of a suburban breadwinner rankles Mr. Fox, and he soon starts plotting nocturnal heists to satisfy his urge for excitement.

Supposedly, Fantastic Mr. Fox was the first book Wes Anderson ever owned, and he still has the copy that he was given as a child. So this movie is what we call a "labor of love." And it shows. Mr. Anderson, with the help of co-writer Noah Baumbach, has taken the original story and lovingly expanded it.

This is a children's story, true, but it's also a story that explores old questions. How do we reconcile our lust for adventure with our need for security? Which is better, to follow our innate drives & talents and achieve self-satisfaction or to sacrifice our desires to provide for the welfare of our loved ones?

These are serious issues. But Fantastic Mr. Fox is a comedy. And, early in the movie, when Mr. Fox starts waxing intellectual about his predicament to his handyman, the down-to-earth opossum replies, "I don't know what you're talking about, but it sounds illegal."

And it's not just the dialog that's humorous. Anderson has always been a director who uses a distinct color palette and every inch of the screen to create a discernible world. He has even chosen to shoot the movie at only 12 frames per second in order to accentuate the puppet-like movements of his characters. Fantastic Mr. Fox is full of sly, blink-and-you'll-miss-them sight gags, and Anderson's decidedly idiosyncratic soundtrack informs the playful mood of the piece, such as when he uses the Beach Boys' "Heroes and Villains" for the break between Mrs. Fox's announcement of her pregnancy and the scene showing how the Fox family has settled into domesticity. 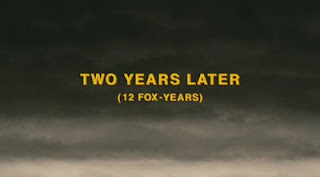 About those scene breaks: Wes Anderson is fond of them, and they help give a sense of structure to what are essentially rambling ensemble pieces swirling around a central character. In Rushmore, it was the adolescent Max Fischer, struggling to juggle his overdeveloped sense of grandeur and his raging hormones. In The Life Aquatic with Steve Zissou, it was Bill Murray's title role, a burned-out ocean explorer dealing with a boatful of personal issues. Sure, these plots tend to ramble, but only because Anderson allows the richness of the worlds he creates to impinge on the storyline. In The Darjeeling Limited, despite having Adrien Brody & Owen Wilson & Jason Schwartzman as triple leads, the movie's minor characters stole the show.

And, in Fantastic Mr. Fox, the minor characters also get their due. From Kylie the opossum handyman to Badger, Mr. Fox's lawyer (voiced by Bill Murray), they are each fully-realized and given their moments on the stage. Even the bad guys get to elicit a measure of pathos, as when Willem Dafoe's malevolent Rat has his showdown with Mr. Fox. We actually feel a little sorry for the loser in that fight. 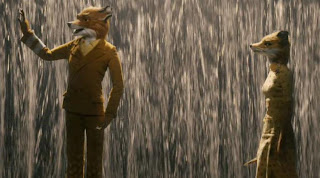 That Fantastic Mr. Fox is able to engage our sympathies in a story starring stop-motion figurines is in no small measure due to the voice-work of the cast. George Clooney brings his gravelly-yet-smooth enunciations to the title character, making him an animal-world analog to the Danny Ocean character he has portrayed in several Soderbergh-directed heist comedies. Meryl Streep brings her always flawless vocal control to the character of Mrs. Fox, effortlessly-but-convincingly moving from exasperation to adoration as she copes with her husband's hijinks. Her best line? "If what I think is happening is happening...it better not be." You just have to hear her say it.

I could go on through the entire cast listing, but you get the idea. Anderson picks great actors and knows how to use them.

Fantastic Mr. Fox is an animal story, but the theme of these urbane animals having to embrace their wild side has all-too-human equivalents. These characters come to terms with who they are by doing what we all do -- by being tested and by finding ways to survive. Anderson's characters are oddballs, sure, but in a sense we all are, stumbling through life, attaining hard-won moments of clarity only to squander them with the next irrepressible urge. Mr. Fox's final toast to his compatriots is particularly appropriate, but it would only make sense once you've watched the movie. Which you really should. 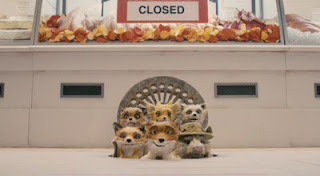 So, I hope I've proven that Fantastic Mr. Fox is worth a look. It's got a richness that I've barely tapped. I haven't even mentioned Anderson's inspired use of the word "cuss" or the wonderful satire that is the game of Whackbat. And the three farmers Mr. Fox goes up against? They're positively phantasmagoric. Those treats and more await you should you decide to enter this crazy, entertaining world. I recommend that you bring your kids along for the ride.