I have lived in the Las Vegas valley since 1985, which pretty much makes me an honorary native. But even more-established natives seem plagued by a persistent myth: that Las Vegas gets its power from Hoover Dam.

The fact is, Sin City & its environs get their juice from a variety of sources. In the main, our power comes from a group of power-generating stations like the one I drove past today: 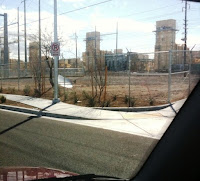 This is the Edward W. Clark Generating Station, which was established in 1955, when it was surrounded by desert & was designed to address the energy needs of 100,000 residents. My, how times have changed! Nowadays it's hemmed in by neighborhoods and the U.S. 95 freeway and is home to dozens of generators, ranging across several generations of technology. An interesting article about the history & capacity of this station can be found here in PowerMag magazine. A map of other such facilities (circa 2006) can be found here.
So, it turns out that Hoover Dam energizes Los Angeles, while we Las Vegans rely on not-so-old-fashioned gasoline-powered turbines.
This may not be particularly interesting or revelatory. But I think it's important to know where the electricity you're using comes from. In Las Vegas, it's gasoline, not the Colorado River.
In an area that's blessed with an abundance of sunshine & wind, this seems wrong. I can only hope that technology & market forces can come together to start creating power that is truly renewable. Only then will Las Vegas become a sustainable community instead of a century-long mirage in the desert.
One sign of hope is the UNLV/CER Solar Site, located just north of the UNLV campus, alongside Flamingo Road, which features an array of impressive-looking projects that aim to get us further along towards the goal of sustainable energy.

Wherever the breakthroughs come from, let's hope they come soon.
Posted by JJ Wylie at 4:39 PM